The events of May ‘68 in France were an unprecedented eruption of people power that shook the world. In the next installment of our 1968 series, T

The events of May ‘68 in France were an unprecedented eruption of people power that shook the world. Only 50 years ago, the French government was forced into a standstill by a coalition of students, workers and radicals who were not only protesting against the right wing Gaullist regime, but were demanding a more equal socialist society. Looking back on May ‘68 we can find proof that powerful resistance to capitalism can flare up in a somewhat unpredictable manner. 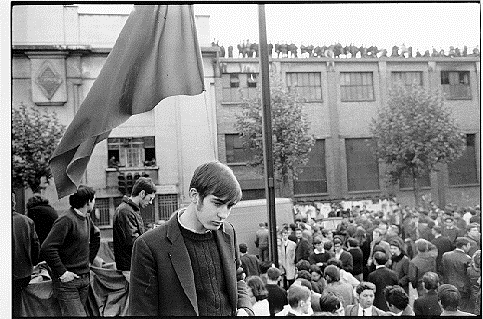 Students in front of Renault factory in Boulogne-Billancourt

A student movement existed in France in the early 1960s mobilizing against the Algerian war. Students were enraged by the brutal repression of the French army in Algeria and the threat of conscription that would send them off to fight a war they opposed. This led to many students aligning with the socialist Left who were long opposed to French colonialism. 1968 saw a vibrant reawakening of the student movement in Paris and across France.

Globally, students were organising and beginning to question the whole capitalism system throughout the 1960s. The 1960s saw the Free Speech movement in Berkeley California, massive student involvement in the Black Civil Rights movement across the US South, students organising in London and Belfast. In universities, especially in liberal arts and social science subjects, students were learning about critical theory and political thought that resonated with their own frustration with their institutions.

Universities had previously been the preserve of the future ruling class. After WW2 many Western governments decided to fund free education programs, meaning that access to higher education was a possibility for working class people. For example, in Britain, the number of students in higher education was 69,000 at the outbreak of WW2, and rose to a massive 300,000 by 1964. It became apparent to students that universities were now functioning as training grounds for white collar workers, causing a feeling of alienation amongst students, culminating in the outbreak of student radicalism.

By 1968, there were over 550,000 students in France as opposed to 200,000 in 1960. Technological advances in society required a workforce with higher educational training, yet France had not improved its educational provisions to cope with this influx of students. The first significant site for student protest in ‘68 was the Nanterre campus of the University of Paris. Nanterre, which had recently been built on the outskirts of Paris to accommodate for the growing demand for higher education, was overpopulated and couldn’t provide adequate facilities for the growing number of students. The administration at Nanterre was highly authoritarian and traditional. In November 1967, 10,000 students went on strike to protest the unsuitable conditions, specifically the policy of strictly segregating men and women in their dormitories. These protests were bolstered by the small, but growing movement of anti-war students protesting against the Vietnam War. While initially quite small, the university authorities tried to repress their protests, which galvanised wider student body support. In fact, several student leaders were arrested before an anti-imperialist day organised for May 2nd-3rd.

After the arrests, over 400 Nanterre students went to the main campus of the University of Paris at the Sorbonne to protest. On May 3rd the police cordoned the university in riot gear, arresting students who followed the orders to leave peacefully. This devolved into a violent confrontation, and the Sorbonne was closed by the rector. The police repression attracted more support from students and thousands gathered around the cordon. A violent confrontation ensued with the police injuring over 100 people and protesters famously fought back with cobblestones dug up from the streets. The students at the Sorbonne had growing support from the national student union and other teachers’ unions, and demonstrations continued. All across France students came out on strike and protested their learning conditions and the violent repression of their fellow students. 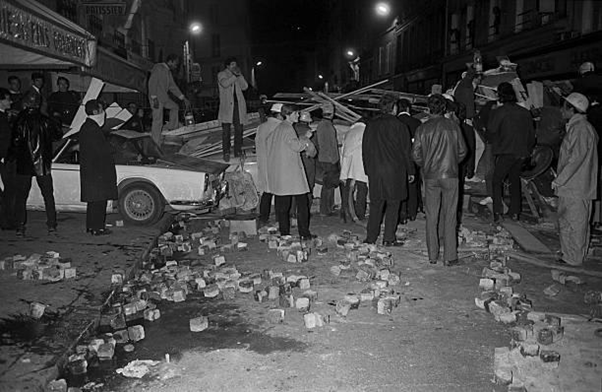 The Night of the Barricades, May 10th, saw up to 40,000 student protestors on the streets of Paris. In the days following, workers occupied factories and went on strike. By the following week, over 10 million workers, roughly two-thirds of the French workforce, were on strike across France. At the front of the May 13th general strike demonstration was a banner that read “Students, teachers, workers – solidarity”.

The French working class were at a boiling point and proved ready to engage in militant action against the state when the opportunity arose. May ‘68 showed that no capitalist power is immune from working class uprising, even in so-called developed countries where living standards are comparatively better than other parts of the world.

On the 29th of May, De Gaulle was forced to flee the country to speak with army officials in West Germany about how to handle the crisis. He returned with a new propaganda plan; refusing to step down and condemning the ‘totalitarian communism’ of his opposition. He lured the unions to back down with the prospect of a parliamentary election, and they rushed to prepare rather than trying to escalate the strikes and the protests in the streets. In June, police began to attack strikers and violently break up pickets, even killing several workers.

Eventually, De Gaulle was able to restore order. The strikes were successfully beaten off the streets. Workers returned to work, and students to the classroom. ‘68 remains a high point in student and workers militancy and important lessons need to be taken from this remarkable struggle.

The May 68’ revolt saw people connecting workers’ struggles with the student movements. Millions of people were influenced by political philosophies rejecting capitalism, imperialism and Gaullism. The dominant narrative around May ‘68 caricatures it as merely a ‘youth revolt’, where students demanded more freedom on campus, a further expansion of higher education and better accommodations. The reality is that there was a high level of political awareness at the time in the workers’ movement and in universities.

The relationship between the student and union movement in May ‘68 was fraught. The official French Communist Party and its affiliated unions were very dismissive of the student leaders, condemning them as bourgeois and ultra left. However many members had sympathy for the students and joined in the student protests in early May. Some unions were determined to undermine the students in order to be in a better position to negotiate with the government following the period of unrest, and did not like that the student movement was not under their ideological control.

Interestingly, many of the factories that were occupied and went on strike at the beginning of May were not traditional union bastions, but had a young and radical workforce. These strikes spread like wildfire throughout France and forced the hands of the conservative union leaders into supporting worker militancy.

Additionally, many former members of the Communist Party became disillusioned after the Prague Spring and Hungarian revolution were crushed by the Soviet regime, and some joined other Maoist, Trotskyist and anarchist groups on the Left in France. 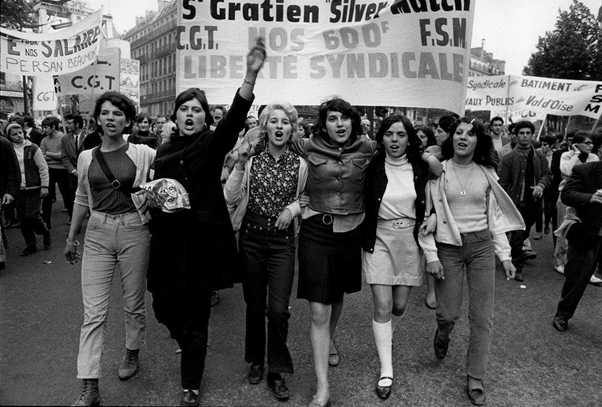 While some still consider student activism as privileged and middle class, we should be wary of dismissing the material circumstances of students and their ability to engage meaningfully in struggle. Students are not exempt from the growing economic pressures in our society, and more often than not students are also workers. A 2016 report by the Irish Examiner found that 68% of students in Ireland work an average of 17 hours a week, and 26% work to cover educational costs. A 40 hour per week minimum wage job without tax would not even be enough to cover a year of the average rent in Dublin, nevermind taking into account living expenses.

While fees are free in Ireland for first time undergraduate students, the student contribution charge is exorbitant, costing €3000 per year. This is an obscene increase, as these charges were introduced in 2001 at €196.
On top of that, there is the threat of a student loan model being brought in which would prevent many from even considering higher education.

A difficulty in student organising, is that often reforms won on campus can be reversed by a school administration. Every radical student willing to stand up to authority has to leave university at some point. This has implications for the student movement, making it nebulous and inconsistent. College administrations are always lying in wait to bring in the same fees and charges a previous generation has fought down. Unless students have full democratic control alongside staff of how their universities are run, universities will not run in their favour.

We need to fight on the basic needs of students; an end to university fees, affordable and publicly provided accomodation within a reasonable proximity to colleges, accommodating learning and examination structures, etc. It is crucial that these issues are linked to the wider economic contradictions of capitalism. The corporatized university is a mind numbing production line for white collar workers, and students have less and less autonomy over their own studies. The free market is incapable of providing fair and equal access to education. It also facilitates better the disciplines that are more economically beneficial such as business rather than arts. Education should be fully publically funded and seen as a public good, yet the establishment is relentlessly trying to privatize every bit of it. It is undeniable that students face debilitating economic pressures inside and outside their universities, but the mere fact that they are oppressed is not enough to inspire resistance. A vehicle is needed to build sustainable power that can challenge the establishment.

In May ‘68, students, teachers and workers were united, won over by arguments against the intellectual and economic oppression of capitalism. Even though the movement was crushed by the government and sold out by the official unions, it proved that people were willing to rise up when the opportunity arose. May 68 taught us that a mass uprising is possible, but it can only win with the mass organisation of the working class.

Today it is important that students and workers show solidarity to each other in their struggles, especially as the ruling class continually represses the trade union movement across the world. In any mass uprising, the withdrawal of labour is one of the most potent tools. Students as a grouping in society do not have the means to withdraw their labour and disrupt the economy on a massive scale. This is a limitation, but does not undermine the importance of student activism. Student radicals can engage in radical actions without the same repercussions as workers, and provide inspiring examples of what is possible through collective action.

Students should take pride in May 68, as we are a part of a radical political tradition that continues today. Police tried to brutally repress French students in 68, just as they did in Ireland during the 2010 anti-fees student protest in which gardaí on horseback battered students. Every baton taken and every bruise gotten was one for our movement towards a better world. We face so many of the same issues today that the students of 68 rose up against. Our demand for a socialism is not only needed, it is necessary. To quote a much-scrawled slogan from 1968; “Run comrade! The old world is behind you!”

Burntollet: How the establishment whitewashed the Civil Rights...

Report From the French Elections