Leo Varadkar is calling for a new carbon tax to “tackle climate change.” Brian O’Boyle dissects this proposal, arguing that it is a distraction from genuine efforts to save the environment.

Climate change is the biggest threat facing humanity. Last October, the International Panel on Climate Change (IPCC) confirmed that we only have 11 years to shift dramatically away from our current reliance on fossil fuels or face the threat of future catastrophes. Staying at or below a 1.5°C increase in temperatures is considered essential if the planet is to avoid a dangerous tipping point that could slash global crop yields and put the homes of 10 million people under water. We are already experiencing increasingly severe weather conditions as polar ice caps melt quicker than expected and the huge Siberian permafrost is starting to melt- releasing methane and further accelerating global warming. On our current trajectory, half of the world’s species are at risk of extinction by 2100 as habitats are destroyed and ecosystems unravel. We must act now and we must act decisively to reduce global CO2 emissions. From a baseline in 2010, we need to cut emissions by 45% by the year 2030 and reach zero emissions by 2050. So far, however, all of the momentum is in the opposite direction. Consider the graph to see this for yourself. 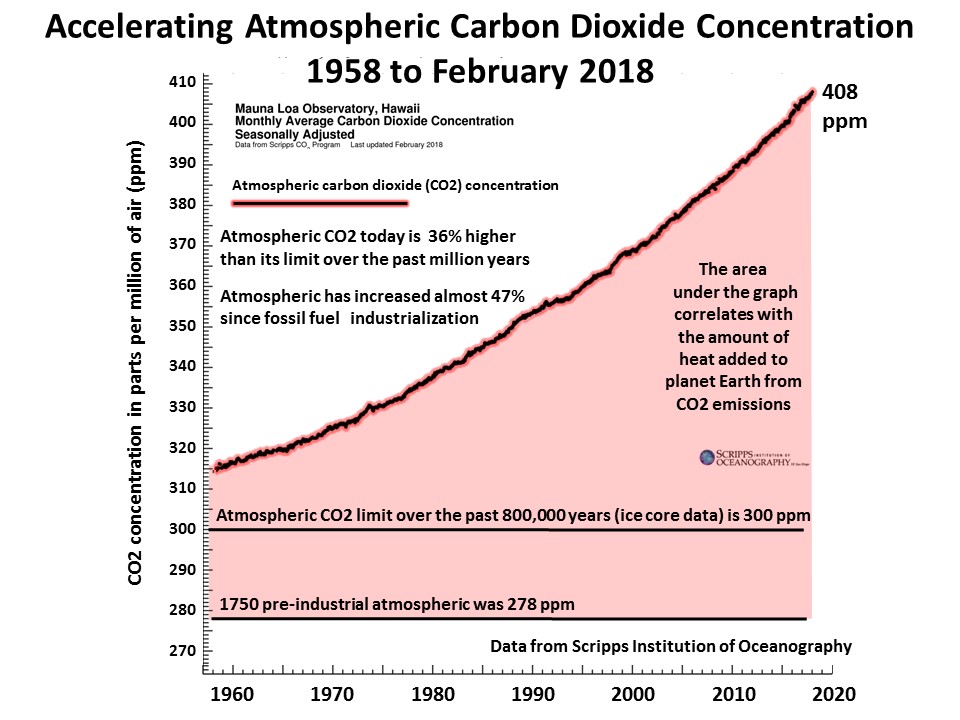 Global leaders have understood the dangers of climate change for well over thirty years but their support for capitalism means they have done nothing serious about it. Capitalist economies rely on an endless cycle of production and accumulation that exploit the world’s natural resources regardless of the wider consequences. At the heart of the system are massive oil and gas conglomerates turning over more than $2 trillion dollars every year. Companies like Exxon Mobile have understood the damage caused by burning fossil fuels for decades but they systematically hid their results and paid hack scientists to muddy the waters. Climate justice threatens the profits of the worlds’ major corporations who will do everything in their power to keep fossil fuels at the heart of the capitalist economy. This puts our rulers on a collision course with the rest of humanity as, increasingly, our options narrow to just two – climate change or system change.

Is Ireland Playing its Part?

Irish politicians often use high minded rhetoric when talking about the need for environmental action, but the state’s economic policies have ensured the Republic has some of the worst CO2 emissions in the world when measured on a per person basis. Back in 2005 Ireland signed up to legally binding EU targets of reducing greenhouse gas emissions by 20% by 2020, but last year, the Environmental Protection Agency (EPA) admitted that, at best, Ireland will manage a 1% reduction – missing its targets by 47-52 million tonnes and risking fines of anywhere from €600 million to €3 billion.

In January, the Minister for Communications, Climate Acton and the Environment, Richard Bruton, encapsulated the hypocrisy at the heart of the government’s current strategy when he launched an initiative to make Ireland a global leader on climate justice on the very day that his department was issuing new licences for oil and gas exploration in the Porcupine Basin off the West Coast. A wider look at the government’s economy strategy further reveals their true priorities.

Agriculture: Agriculture is the biggest contributor to Irish CO2 emissions – accounting for 33% due largely to methane from the dairy herd. Any government that was serious about climate change would incentivise a move away from dairy towards forestry, but Fine Gael have instead supported a massive increase in the dairy herd to take advantage of a relaxation in EU milk quotas in 2015. Over the last decade the number of cows increased by 40% to 1.4 million with a plan for a further 22% increase forecast by 2030. This is expected to increase the agricultural carbon footprint by 7% in the next 10 years.

Transport: Transport accounts for roughly 25% of all emissions. The most obvious way to reduce this figure is to invest heavily in public transport, but successive governments have instead cut subventions to Bus Eireann, Dublin Bus and CIE. This has resulted in a massively car dependent society with 2.7 million private vehicles on Irish roads and 1.8 million driving to work daily. Transport emissions are projected to increase by 17-20% by 2030 due to bad public planning and an overreliance on private vehicles.

Energy Consumption: Energy Consumption is the third biggest emitter, accounting for roughly 20% in Ireland. Given its geographic position, Ireland is extremely well placed to be a leader in renewable energy, but a lack of grants for households coupled with a lack of investment in renewable capacity means that 90% of Irish energy still comes from fossil fuels. This puts Ireland 22nd of the EU 28 who, on average, now generate twice as much energy from renewables as Ireland does.

Residential Buildings: Residential energy use accounts for between 12-15% of carbon emissions. Instead of implementing standards for insulation and energy use, successive governments have protected the building industry through lax regulations. This has made Irish households the least efficient energy users in the EU – with 60% higher emissions than the EU average.

Fossil Fuel Exploration: People Before Profit recently brought a bill to the Dail to halt fossil fuel exploration. Instead of giving this their full support – Fine Gael blocked it at committee stage and have continued to give out licences to their friends in the oil and gas lobby. In January, Providence Resources was granted a Frontier Exploration Licence and a recent industry report by PwC estimates that oil and gas exploration will increase by €500 million over the next two years.

Fine Gael have no interest in taking on their friends in big business, but as the global climate movement gathers pace, they do have a strategic interest in being seen to act responsibly. A genuine effort would involve setting legally binding targets that industry must live up to, but instead, the state is gearing up for a tax on carbon use that puts all of the responsibility on working families. Like other governments across the world, Fine Gael will push carbon taxes as a dangerous distraction that lets the major polluters off the hook. Exxon Mobile and the other major fossil fuel companies actually support carbon taxes as they know they will never be set at a high enough rate to seriously reduce demand for their products. A recent report by the Economic and Social Research Institute estimated that an effective carbon tax would have to be set at €300 per ton or €1,500 for every person in the country. This would rise to nearly €2,500 if farming continues to increase its output, meaning a family of four could easily be expected to hand over €10,000 per annum. This would clearly anger the population and in the wake of the Right2Water campaign, the government has moved to placate the population through a rebate system. This would supposedly put money back into people’s pockets but  the government has a track record of reneging on its promises (think of bin charge waivers for example) and even if it didn’t, a waiver system would reduce the need for people to switch their behaviour. Either way, carbon taxes will not get anywhere near solving the current increase in CO2 emissions. Below are four reasons why we should not put our faith in this dangerous illusion.

Let’s look at some of the evidence from other countries.

The Evidence on Carbon Taxes

Norway is often held up as a pioneer in climate policy. Since the 1990’s, Norwegian carbon taxes have been amongst the highest in the world but they have been largely ineffective. A recent report found that with zero carbon taxes, emissions in the decade from 1990-1999 would have increased by 21.1% but instead they went up by 18.7%. This amounted to a 1.5% reduction for onshore emissions and 2.3% overall – nowhere near enough. British Columbia is another example that is often put forward by carbon tax enthusiasts but the evidence is once again damning. British Columbia introduced a carbon tax in 2008 which coincided with the start of the Great Recession. In the decade since, overall reductions in the Canadian Province have been between 1-2% – but even this was primarily caused by a slowdown in production associated with the economic crisis. While implementing carbon taxes on ordinary people, Canada has also ramped by its production of crude oil by 133% between 1990 and 2017 in a move that mirrors Irish hypocrisy on the issue. Another study from 2016, found very similar results, with comparisons of 8 countries that had introduced carbon taxes measured for both energy intensity and carbon intensity. In the five years after the taxes were brought in, energy intensity fell by an average of 0.5 -0.8%, while carbon intensity fell by 0.1- 0.7%. None of this is remotely enough. Remember we need massive changes to bring our carbon footprint down and crucially these changes would make the cost of carbon astronomic. 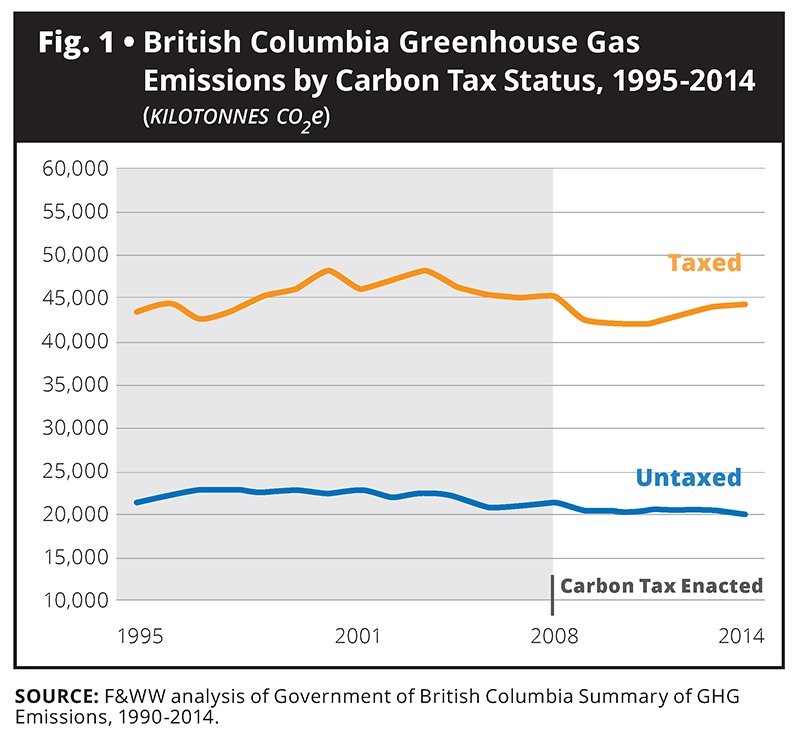 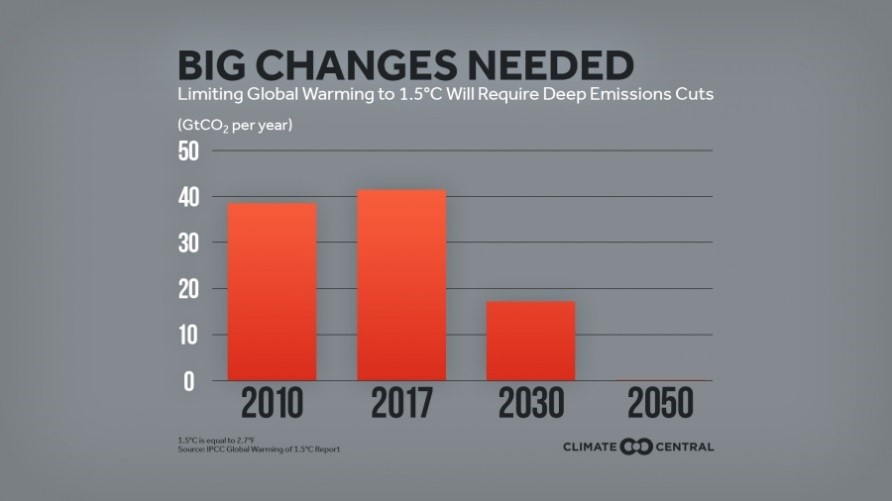 Unlike the establishment parties, People Before Profit are committed to radical action on climate change that restricts emissions by taking on the corporate sector. Below we show what could be done in the major emission areas with the right level of political will.

Collectively, these policies would make Ireland a leader in the fight against climate change but they will never be supported by Fine Gael or Fianna Fail. So far, almost all of the political parties support the carbon taxes being proposed by the government, but this will not go nearly far enough for the growing movement looking for climate justice here and around the world. In February, five hundred students gathered outside Dail Eireann in preparation for a major student climate strike on March 15. There are also a series of grassroots groups (Not Here Not Anywhere, Extinction Rebellion etc.) fighting for climate justice in ways that go far beyond the safe channels of establishment Ireland. Like us, many of these groups see carbon taxes are a dangerous illusion designed to hide the hypocrisy of the political and economic elites in this country – whilst forcing ordinary people to pay the cost for any changes that do occur. This is not only politically regressive it will not work as a genuine solution. If we are serious about fighting climate change, we need to fight the causes of this change in mass production for capitalist profit. We need system change not climate change.

TIG – Where the Past Goes to Die

A Voice for the Voiceless