Home 68' Legacies On a January Weekend in Memphis

The third Monday in January, a federal public holiday, marks the memory of civil rights leader Martin Luther King. Beyond a day off work for many (although not all), the MLK holiday is now a day to watch a commemorative NBA basketball match involving the Memphis Grizzlies, or to give some form of service to your local community.

Often overlooked is the role of organised labour in securing the birthday of Dr King as a federal holiday. For example, in the autumn of 1969, hospital workers in NYC refused to go back to work, following a strike, without securing a paid holiday for Martin Luther King’s birthday. Similar such actions continued for the next 15 years across the US.

In Memphis, the annual city holiday marking Dr King’s assassination has its roots in an agreement negotiated by the American Federation of State, County and Municipal Employees (AFSCME) Local 1733 for their members in Memphis Housing Authority back in 1973.

Before exploring the role of labour in Dr King’s thought and its continuing relevance today, however, there is the small issue of the Trump administration’s relationship with MLK’s legacy.

2020 being a presidential election year, it was inevitable that the incumbent administration would try to find some way of linking themselves to Dr King’s legacy. Vice-president Mike Pence, who still refuses to meet one to one with women other than his wife, was mobilised and sent to Memphis the day before the holiday. Pence was whisked through the National Civil Rights Museum (NCRM), built on the site of the Lorraine Motel where King was shot, and is reported as saying he did not know much about the civil rights movement.

It’s unlikely he learnt much during his tour which was completed in a flat 30 minutes. However, the biggest controversy of the Vice President’s visit was the claim he made, while giving a speech at the Holy City Church of God in Christ, that Trump’s administration was in harmony with MLK’s legacy.

Now it is easy to point out the many and varied ways in which Dr King’s thought and actions are diametrically opposed to the current administration—from King’s principle of non-violence in campaigns at home and military disasters abroad (such as Vietnam), to his internationalism and criticism of “western arrogance that has poisoned the international atmosphere for so long”. But most of all it is King’s unwavering belief in unity and collective action in the pursuit of freedom:

And when this happens, when we allow freedom ring, when we let it ring from every village and every hamlet, from every state and every city, we will be able to speed up that day when all of God’s children, black men and white men, Jews and Gentiles, Protestants and Catholics, will be able to join hands and sing in the words of the old Negro spiritual:

Thank God Almighty, we are free at last!”

And yet it is the religious basis to King’s vision for freedom that allows Pence to attempt his appropriation. Referring to “Reverend Dr Martin Luther King”, Pence told the congregation, “he was first and foremost a man of faith”.

This undeniably true and it was from King’s faith that he drew such inspiration to go to the promised land here on earth, and not to wait until the next life. This led him in his last years to not only condemn the Vietnam war but also to address the economic inequalities that civil rights had not ameliorated. King understood that the riots taking place in many black communities in the mid and late Sixties were a reaction to a range of causes—including the white backlash, the war in Vietnam, pervasive discrimination, unemployment and inadequate investment in urban communities.

He wanted to challenge “the privileged minority” and the US system of society “to demonstrate that it can abolish not only the evils of racism but the scourge of poverty…. and the horrors of war”. While this ultimately leaves King trying to work within the confines of capitalism, it is a very long way from the worldview of VP Pence and the Trump administration. 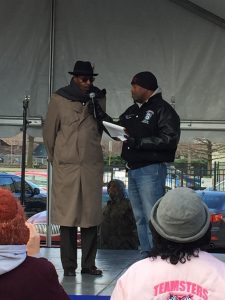 This brings us back to Memphis today and the annual MLK Parade, now in its 35th year. This year the march was co-organised by Teamster Local 667 and the Memphis branch of the NAACP. There was also a strong representation from local members of two fraternities—Alpha Phi Alpha (Dr King’s old fraternity) and Phi Beta Sigma (co-founded by local Memphian, Abram Langston Taylor, in 1914).

Organised labour was also represented on the day by AFSCME Local 1733 members, with the honorary role of parade grand marshal this year going to Rev. Cleophus Smith, one of the strikers from 1968 who established the union locally.

Other union delegations included UAW members who had been on strike before Christmas trying to secure better working conditions at GM. On the journey across downtown to the NCRM there was some discussion of the UAW-GM deal, for which there was a lukewarm reception.

The main discussions centred around a dispute brewing among the city’s sanitation department workers. Last October 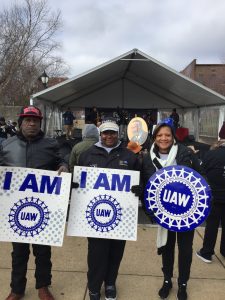 the mayor of Memphis was re-elected for a second term, and along with his reappointed Solid Waste Director have gone on the offensive trying to restructure the litter and trash services by threatening job losses and privatisation.

Before Christmas the Mayor threatened deep cuts in services and hundreds of job losses if the utility charges were not increased. In December, the City Council voted to raise the average utility bill by $7.16, leading one city council member to describe the Mayor’s approach as the tactics of extortion.

No sooner had the jobs cuts receded than the threat to privatise the services was brought to the fore. At a City Council meeting in January, some rank and file sanitation workers lobbied against the reappointment of the Solid Waste Director, saying it would pave the way for further cuts and privatisation.

The workers also raised the increased workload and planned compulsory working on Saturdays, including on 4th April, a city holiday in Memphis to mark the assassination of Dr King.

In many ways the City of Memphis seems not to have moved on since 1968, including how it treats its own employees. This is where learning from that history and drawing on the inspiration from both the ’68 strikers and the ideas of Martin Luther King remain relevant today. 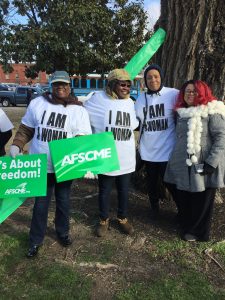 From solidarity to collective disruption

After the MLK Parade, at the Dr Martin Luther King Jr. Labor Center, AFSCME Local 1733 hosted a luncheon, which was addressed by Matt Brown, Strategic Campaigner from the Teamsters. Brown informed the attendees that sanitation workers in Atlanta were being forced to work on Dr King day, at normal pay rates. He read out the phone number of the director of Sanitation in Atlanta and urged the audience to ring the number and complain.

This may be a small gesture but it contains more of Dr King’s perspective in his last years than the limited and safe impact of the other community service activities, such as giving blood or cleaning public spaces.

In December 1967 Martin Luther King gave a series of four radio lectures for the Canadian Broadcasting Corporation, in the first of which he expanded on his views about how change was to be brought about. Where a march in the South could cause a social earthquake, “in the North, it is a faint, brief exclamation of protest”. King went on, “nonviolent protest must now mature to a new level”.

Mass, open civil disobedience aimed at disrupting the normal functioning of society was (and remains) what is needed.
At one end calls to the director in Atlanta causes some small disruption, while the wave of teachers strikes from LA to Chicago over the past 2 years brings the struggle another level, often generating successful outcomes. As Rev James Lawson, chief co-ordinator of the 1968 strike support group, reminded us last 4th April, withdrawing labour is a form of nonviolent protest.

Given the challenges working people face, remembering King as the supporter of labour and mass civil disobedience is as relevant today as fifty years ago.