Home Covid-19 Agency work in the NICS: A case study

Agency work in the NICS: A case study

Agency work in the Northern Ireland Civil Service: A case study in the politics behind privatisation, de-unionisation, and the need to end precarious work. As the COVID-19 crisis exposes the scale of employment precarity, this need becomes ever more urgent.

Precarious work is nothing new. Workers hovered just above the poverty line prior to the Covid-19 crisis, treated as disposable. Assaulted by an avalanche of uncertainty, insecurity, fear and alienation, our fears are explained away as neurological problems and a lack of personal coping strategies. Perpetually teetering on the edge of unemployment and left unable to plan our lives any further than ‘the next few months’ at any one time.

Since the Great Recession of 2008, precarious employment has been massively expanded and normalised. This is best evidenced by oft-overlooked agency workers, whose lack of rights is underrepresented in trade union campaigns and habitually absent from political party manifestos.

Ranks of agency workers across the UK have risen by nearly a third in five years, on par with those on zero-hours contracts, yet they have been largely ignored in the debate about worker exploitation. Of 42,000 temporary workers in the north of Ireland by December 2019, almost 9,000 were zero hour contract workers compared with up to 15,500 agency workers – 2,500 of whom are based in the central Norther Ireland Civil Service (NICS).

NI Agency Worker Regulations, introduced in 2011, were pitched as a win for workers. The truth is that the regulations – first drawn up in Brussels and later introduced by a Stormont Assembly led by the ‘five main’ establishment parties – offered only minimal legal protection.

It did not, as is often claimed, ensure that an agency worker qualifies for the same the full contractual employment rights as someone employed directly. Rather, it focused on the limited issues of income in three areas: ‘equal pay’, paid annual leave, and automatic pension enrollment.

Even these gains do not equate to full employment rights. ‘Equal pay’ only commences when an agency worker completes 3 months in the same role, paid annual leave does not include public holidays and can only be availed of on an accrual basis, and the rate of pension is set by the agency rather than matched to the pension scheme of the employer.

In practice, the regulations solidify a two-tier employment system which denies workers the right to an equal pension, the right to a redundancy package, the right to paid sick leave, the right to maternity, paternity, adoption and parental leave, and the right to challenge cases of unfair dismissal on grounds of their age, disability, race, religion or political belief, etc.

Not only are agency workers usually denied the same internal disciplinary procedures as direct employees, “the reasons and circumstances under which an agency worker’s assignment has ended are not routinely recorded” by the NI Civil Service (NICS). 1

The implications of agency staffing extend beyond agency workers, too. A recent report by the London School of Economics and Political Science (LSE) found, “the presence of a Temporary Agency Worker (TAW) at the workplace is negatively associated with all employees’ wellbeing… [as] workplace regimes which harbour any TAWs are more labour intensive and perhaps more cost conscious than workplace regimes which do not resort to TAW… [it is] a labour intensification effect which operates at the level of the whole workplace… [thereby contributing to] lower overall job satisfaction, lower satisfaction with non-pecuniary aspects of the job, and higher job anxiety.” In the central NICS, anxiety, stress, and depression have been the absence reasons that account for the greatest proportion of working days lost during the decade of austerity.

A Freedom of Information (FOI) request raised on behalf of Rebel to the Equality Commission of Northern Ireland found that the combined record of complaints made against employers in the areas where agency workers are not protected (harassment, terms & conditions, dismissal, pregnancy/maternity, reasonable adjustment, and sickness) totaled almost 70% of complaint applications within the last 12 months.

And a survey, commissioned by the Northern Ireland Council For Ethnic Minorities (Nicem), also found that racism has supplanted traditional sectarianism as the main reason for employees being harassed, bullied or threatened in the region’s workplaces.

As articulated by Patrick Yu of the NI Council for Racial Equality (NICRE) “employment status is the key determining factor for protection under employment law and anti-discrimination law.” Yet the 2011 Agency Worker Regulations have remained in place for almost a decade without any effort to repeal or replace them.

Indeed, the latest Stormont deal – New Decade New Approach – made no mention whatsoever of agency workers in their “Workers’ Rights” pledge, sidestepping the issue by giving vague assurances to abolish only zero hour contract working sometime in the future.

The lack of action on agency staff by the newest Stormont Executive should come as no surprise, however. Any surface level analysis of employment in the NICS in the period following Stormont’s Fresh Start Agreement (2015) will show an erosion of workers’ rights through casualisation.

Part of the agreement constituted “a comprehensive programme of public sector reform and restructuring”, involving a Voluntary Exit Scheme (VES) across the public sector, which would be offered to up to 20,000 staff. This was predicted to save the public purse £20 million in 2016, and approximately £48 million per annum every year thereafter up until 2020.

The reality proved to be quite different. FOI requests undertaken on behalf of Rebel reveal that the NI Executive has handed over £70 million, at least, to employment agencies to staff the central NI Civil Service alone, within the last 4 years.

The above spending figure, which amounts to 43% of the predicted savings, is the tip of the iceberg. It doesn’t include management fees – paid out of public funds but withheld from public record as ‘commercially confident’ and therefore off–limits from public scrutiny.

Nor does it include the 99 arms-length public bodies covered under the VES, and also staffing high numbers of agency workers, such as the NHS, where the cost of drafting in agency workers to cover staffing shortages topped £200m in 2018 alone – an average of £640k per day.

This amounts to large sums of public money – to the tune of hundreds of millions of pounds per year – being siphoned off to employment agencies in return for supplying the NICS, and beyond, with thousands of workers. And this is being done without transparency to the public who day and daily are told by NI Assembly Ministers of budgetary shortfalls for public services. 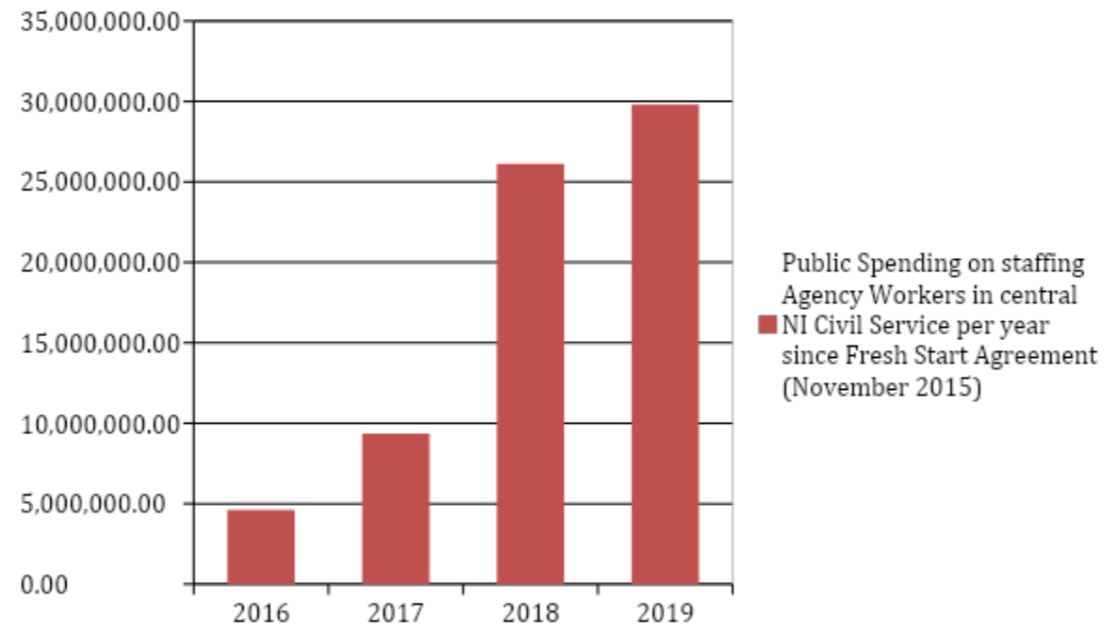 It is crucial to bear in mind that these workers have reduced rights. They fall outside the protective cover of the Industrial Relations Acts introduced to the north of Ireland in 1992, 1995, and 1996. They are less likely to fight back because they can so easily be dismissed, and are therefore less likely to be trade unions members. This is a key facet in the relationship between privatisation and de-unionisation.

What, on the face of it, appears to be a gradual effort “to ‘rebalance the economy’… toward… lower paid, less secure employment”, 2 dressed up as mere (albeit sham) fiscal conservativism, masks a more ominous manoeuvre to break-up weakening public services through defunding and de-unionisation in the long-term.

The public sector is increasingly drifting into the ethos of the private sector whereby the ‘new ways of doing things’ contaminates public sector decision-making more generally, paving the way for more privatisation.

It is not simply the case that the duality of cutbacks and casualisation run parallel to a surge in precarious workers within the public sector, but that through chipping away at the trade union base, via employment agency use, makes transforming and outsourcing public sector work much easier to achieve.

Public sector job cuts coupled with the rise of ‘the gig economy’ represent “a long-term [neoliberal] strategy of shrinking the union base. It goes hand in hand with creating the lower-waged, fewer-rights landscape…Good jobs tend to be unionised but when they go they are replaced by insecure work, which is difficult to organise.”

It is a worrying sign that of the 3,000 permanent NI Civil Service jobs lost via VES, 85% have since been refilled by staffing agency workers. 3 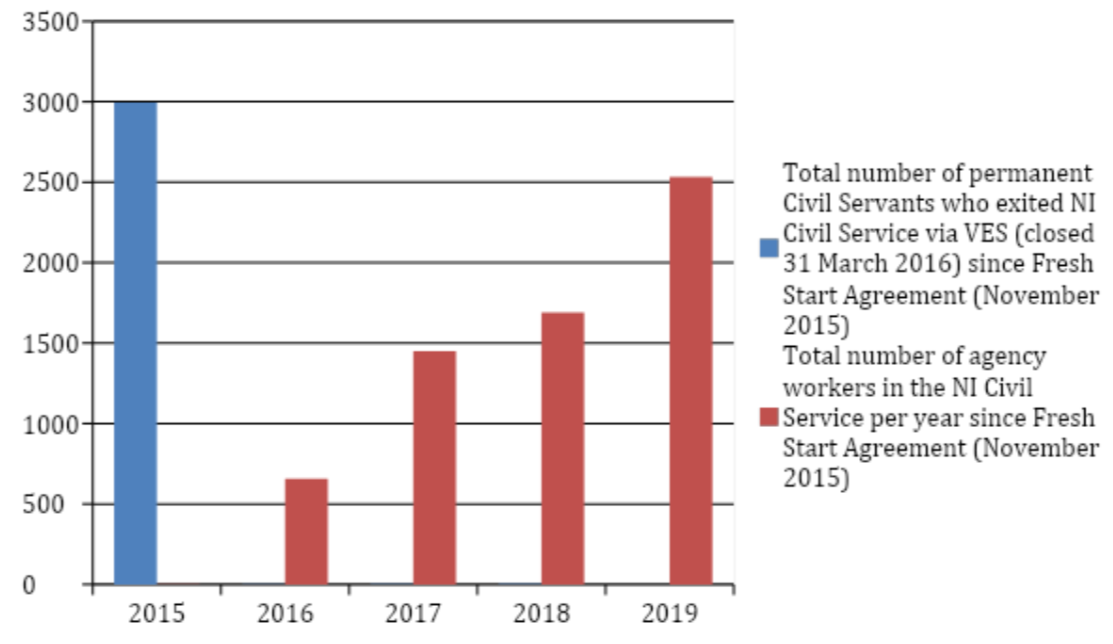 No Going Back to Normal

With the global economy entering ‘lockdown recession’ and neoliberal establishments threatening a decade of austerity to pay for it, the future of all workers, not least agency staff in Ireland, hangs in the balance.

But the ugly realities of work under neoliberalism are being exposed by the Covid-19 crisis everyday, and have the potential to culminate in a watershed moment.

As Eamonn McCann reflected, in his closing remarks at Marxism 2018 in Dublin, of organising in tumultuous times in generations passed, “My advice to people today would be to take ideas seriously, to take politics seriously, and to take the time to think [about] and discuss strategy [than simply be] caught in a whirlwind of activity.”

A lot rests, therefore, on how we organise during and after this crisis. In the immediate, it will require a combination of: trade union organising; a serious demand for the abolishment of agency work, in much the same way trade unions demand zero hour contracts are abolished; and winning more people to the understanding that a different kind of society, where these approaches are the norm, not the fight on our hands, is more necessary than ever.

The importance of translating the slogan “No Going Back to Normal” into a concrete plan of action cannot be overemphasised.