Austerity or Solidarity: Paying for COVID-19

Governments across the world are making decisions about to how to pay for the COVID-19 crisis. Economist Brian O’Boyle assesses the options open to the Irish state and argues that despite the spin, the money exists for a progessive alternative to the austerity our leaders favour.

The Irish state rarely leaves things to chance. When they needed to prevent an underfunded healthcare system from collapsing, they were keen to push the idea of solidarity. Government propaganda repeatedly insisted we all needed to make sacrifices to protect the vulnerable. They even set up a website with the following tagline, “whatever you are going through in isolation, let’s stay connected and make it through, together”.

Behind this fluffy language, Ireland actually had the second worst death rate in care home settings in the entire world. When the aim is to get low paid people back to work, moreover, the language of togetherness was suddenly replaced by dog-whistle politics. Last month, Leo Varadkar began the assault on the state’s COVID-19 payment when he claimed low paid workers were deliberately staying away from their jobs. In the same week, the Supermac’s owner, Pat McDonough, claimed his staff would not come back as they were getting €350 a week on the government scheme. The idea people would give up permanent jobs for a temporary payment is ridiculous, but it suited the government’s agenda to cut the COVID payment, starting with those in part-time employment.

The second aspect of the state’s ideological assault comes in two parts. Firstly, they insist that the only way to pay for the crisis is to borrow money on international markets. This is presented as common sense, when it is actually a political decision not to tax the wealthy. Secondly, they warn us not to expect state support for too much longer in case the cost of this borrowing starts to increase. Here is Varadkar speaking in the Dáil:

Paschal Donoghue backed this up with talk of ‘bond market vigilantes’ who would punish Ireland if it tried to borrow for too long. Presented as commentary, these are highly ideological interventions, designed to convince people that they must get back to work and that financial speculators will decide how long workers can have support in this state.

The third part of the government’s strategy is to contain the debate around paying for COVID-19 to the last few months. This way, they can exclude the fact that Ireland was the fastest growing economy in Europe since 2013, because the state was so successful at imposing austerity in the six years before that.

After the Great Recession the Irish elites wanted to protect the key sectors of Irish capitalism that caused the crisis; they wanted to protect the state’s finances without increasing taxes on the rich and they wanted to use the crisis to restore Ireland’s international competitiveness. The bank bailout and NAMA helped to achieve the first aim. Austerity was deployed to achieve the second and the private sector implemented the third by keeping wages below increases in workers productivity. So much for us all being in it together.

We Are Not in This Together

The 12 years since the Great Recession can be understood as a tale of two halves. In the first six years, the ruling classes made sure the costs of the crisis were paid for by working people. In the second six years the elites reaped the rewards of this strategy as the economy expanded thanks to higher levels of international competitiveness. Data from the European Statistics Agency, Eurostat, shows that labour productivity increased by 34% from 2010 to 2017, at the same time as nominal unit labour costs fell by 17%. The same data shows that overall wage costs fell by 8% – mirrored by an increase in the profit share of more than 8%. The table below gives a visual representation of the reduction in the adjusted wage share since the Great Recession.

As well as increasing the levels of exploitation in the economy, the social wage that workers receive was cut in two different ways. Firstly, successive governments reduced the size of the public sector by sacking workers, reducing their pay and cutting back essential services. Secondly, they increased the amount of taxes levied on labour without increasing taxes on capital. Adjusting PAYE bands and introducing a new income tax known as the Universal Social Charge (USC), the state increased the share of taxes paid by workers from 21% in 2007 to 32% in 2018. Despite this, Ireland is at the bottom of the European league tables for the revenue it has to spend on public services – take a look at the table below: 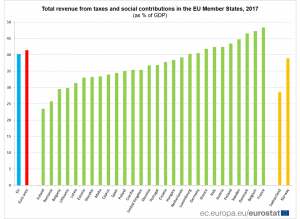 Collectively since the Great Recession, Irish workers are paid less for more in their private wages and get less for higher contributions in their social wages. This shift from labour to capital was the background condition for a major recovery from 2013 onwards, which has made the owners of capital extremely wealthy. Three measures can be used to back up this point.

Firstly, the profits of the Irish corporate sector are up from €40 billion in 2013 to €79 billion in 2017 – the last year for which we have figures. Some of this has to do with tax avoidance by US multinationals, but it is also the result of higher levels of productivity from Irish workers.

Finally, the amount of private household wealth has gone from €350 billion in 2013 to more than €800 billion today. If we focus on the wealthiest 5% of households, their collective wealth is up by €115 billion or €1.35 million each. This is a cumulative increase in wealth of 77%, or an annual increase of roughly 11%. The table below gives readers a sense of who owns what in Irish society.

Understanding this background detail provides workers with a sense of the options open to the incoming government. It is possible to avoid austerity completely, but we know that Fianna Fáil and Fine Gael will try to force the costs onto working people by cutting state support and presenting private bondholders as the country’s only option.

They weren’t the only option in the aftermath of the last recession and neither are they today. If we are truly all in it together then paying for COVID-19 should be done on the same basis as the medical emergency, with the most able gladly protecting the most vulnerable.

This can be done relatively easily, moreover. For example, a 2% solidarity wealth tax on the top 5% of households would bring in somewhere in the region of €4 billion annually. This is defensible on the basis of the needs of the population during this pandemic, but also on the basis that their wealth has gone up by 11% annually since 2013.

If this was added to new bands for tax units that earn over €100,0000 and an increase in the PRSI contributions of employers that moved them closer to the EU average – the state could bring in the entire €8 billion needed to pay for COVID-19 in one year. Over the course of four years, they could pay for the total projected costs of this crisis without relying on market speculators for any of the money.

In a democracy this is surely the more progressive option, but we need to go further. According to the government’s own projections, 105,000 people will lose their jobs in the aftermath of the medical pandemic as private investment collapses by more than a third. This, in turn, will reduce consumer demand, tax receipts and Gross National Income.

The obvious way to make up for this shortfall in the private sector, is for the state to engage in investment itself. To maximise the social and economic impact, this should focus in key areas of social deprivation and social need – including healthcare, housing, childcare, rural development, housing and environmental initiatives. This would improve infrastructure, create thousands of jobs and move Ireland in a more progressive direction. In our Alternative Budget for 2020, People Before Profit budgeted for an increase in state investment of €11.5 billion based on the following initiatives.

Source: System Change – An Alternative Budget for People and Planet.

The government will claim that this money can’t be found in any magic money tree, but the current crisis has taught us that governments always find money when they need to and impose austerity on the rest of us to pay it back. It has also taught us that workers are key to running society and that there is no way to impose austerity if workers are organised and ready to resist. Our immediate objective is therefore to defend the lives and livelihoods of working people for as long as is necessary. Our ultimate task is to build resistance to a capitalist system that is wreaking such havoc on our lives, society and the planet.

A Healthy World Beyond COVID-19

For a Yes Vote in the ASTI Ballot

End the Pandemic of Violence Against Women

COVID-19: Through the Eyes of Workers in the...