Home Features What did they die for? – Part 3

The third and final part of John Molyneux’s brilliant essay on World War 1 looks at the imperial ambitions of the respective ruling classes who sent millions to their death and sums up the ‘bleak and tragic’ answer to ‘What did they die for?’

It is important to remember that while today neither Trump or Putin or Merkel or May would dream of saying that they were taking military action to defend or extend their respective empires, this was not the case at all in the late 19th and early 20th century when, at least as far the mainstream discourse was concerned, ‘defense of the empire’ was seen as an entirely legitimate and laudable policy goal.

Another ‘pattern’ or point of continuity worth noting is that throughout this period it became an ever more entrenched ‘principle’ of British foreign policy that no single power should be permitted to establish hegemony over continental Europe. This was not out of some spirit of fair play – Britain had no problem with its own hegemony over the entire Indian sub-continent – but on the, very realistic, grounds that any such European hegemony would be highly likely to pose a threat to Britain’s global empire.

However, although it is true that the First World War constituted a culmination of these four centuries of development this is not the whole story. We also have to explain why the 19th century post-Napoleon saw relative peace, at least within Europe, and why that relative peace then turned so dramatically into total war.

To understand this we have to look at the nature of European and global capitalist economic development in this period. The main body of the 19th century was, as Eric Hobsbawm (following Marx) called it, ‘the age of capital’. It was when industrial capitalism, emerging from the late eighteenth century industrial revolution in Britain, came into its own and started to dominate the world – a time of factories and mills, steam power and railways, coal, iron, steel and engineering. As we know, it was Britain who took the lead in this and became for a while ‘the workshop of the world’ and the single most powerful country, economically and militarily, with, of course, by far the world’s largest empire.

But as the century wore on, industrial capitalism began to forge ahead in a number of countries – in the United States, Germany, France, Belgium, the Netherlands, Northern Italy and, eventually, even parts of Russia – and at the same time the earlier ‘free competition’ between large numbers of small firms began to be replaced by the dominance of giant monopolies and finance capital.

As a result of this, and partly in response to ‘the long depression’ of 1873-9, the corporations and banks increasingly looked outside Europe for investment opportunities. Moreover, they turned to their respective governments and their armed forces to provide the necessary political and military backing for these ventures. In short, the last quarter of the 19th century saw a huge rise in imperialism with formal annexation or colonization increasingly replacing the earlier establishment of informal control or influence.

This affected the whole world but was particularly exemplified by the ‘Scramble for Africa’, initiated by King Leopold II of Belgium’s acquisition of the Congo. In 1876 only 10 percent of Africa was under European rule. By 1900 more than 90 percent was colonised..

For a period it was possible for each of the European powers to expand their colonial possessions in competition with each other but without colliding head on. The United States could expand westwards to California (at the expense of the Native Americans) and Tsarist Russia could consolidate its hold on Kazakhstan and Central Asia while menacing Constantinople. But this could not continue indefinitely. Before long, actually by the beginning of the 20th century, almost the whole world was divided up between them. Writing in 1894 the great German sociologist, Max Weber, saw where this would lead:

Only complete political confusion and naïve optimism can prevent the recognition that the unavoidable efforts at trade expansion by all civilized bourgeois-controlled nations, after a transitional period of seemingly peaceful competition, are clearly approaching the point where power [MW’s emphasis}alone will decide each nation’s share in the economic control of the earth.

…the colonial policy of the capitalist countries has completed the seizure of the unoccupied territories on our planet. For the first time the world is completely divided up, so that in the future only redivision is possible, i.e., territories can only pass from one “owner” to another, instead of passing as ownerless territory to an owner

It is this struggle for division and redivision of the world that produces the world war. To this general conclusion one further point must be added. The imperialist division of the world as it occurred in the late 19th century was not in proportion to the economic strength of the main players. Britain, and to a lesser extent France, because they had acquired many of their respective empires in an earlier historical period, were massively over represented in terms of colonial possessions. Whereas Germany, which was the most dynamic and powerful economy within Europe at that time, was hugely under represented because it was such a late developer having only become a unified nation state in 1870.

But there is no reason at all why we should take the point of view of either the rulers of Germany or the rulers of Britain, or regard Britain’s determination to protect its vast empire as more legitimate than Germany’s aspiration to acquire one, or vice versa.

From the standpoint of the ordinary people of all the belligerent states there was no reason to back one set of imperialists against or to choose between them. What is abundantly clear is that the rulers of all the imperial powers involved were willing to sacrifice, and go on sacrificing, the lives of millions of ‘their’ citizens for the sake of defending or extending their respective empires.

And this is the answer to our original question. What did the sixteen million die for?  They died, on whichever side they fought, for the imperial ambitions of their respective ruling classes. It is a bleak and tragic answer. But it has to be said, for what we are dealing with is not only a tragedy but also, what Ferguson and Clarke and others try to deny, a crime – one of the most terrible crimes in the history of humanity.

Bringing it all back home

When we consider the 49,000 Irish dead, this conclusion is particularly galling for not only did they not die ‘for Ireland’ or for freedom or for any justifiable cause, they died for precisely the empire who had for so long oppressed Ireland. To put this in perspective we should note that in the 30 years of ‘the Troubles’ in the North approximately 3500 died (of whom 705 were British soldiers); in the Irish Civil War the death toll was 3-4000; in the War of Independence it was about 2000; and in the Easter Rising it was 466 (116 British Army). The loss of Irish life in the First World War therefore was more than four times that in all these conflicts put together. One has to go back to the suppression of the 1798 Rebellion to find any comparable blood letting in Ireland (apart, of course, from the famine).

The pro-war propaganda and recruitment posters of the time are available online, here. Here are examples which make for sickening viewing: 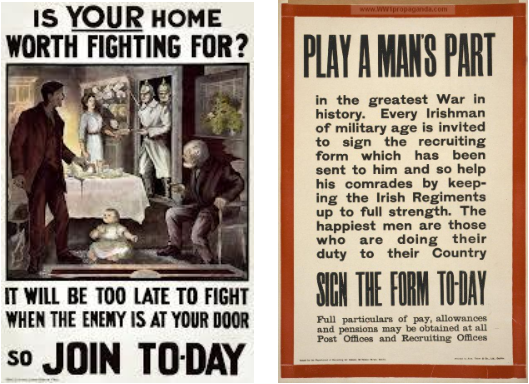 The ‘Play a man’s part’ poster on the right is the kind of crude stuff for which Wilfred Owen’s great poem ‘Dulce et decorum est’ was the definitive answer. The poster on the left is deeply ironic in that the scene depicted was to destined come to Irish homes in a few years, not at the hands of German soldiers but in the shape of British Black and Tans, many of them veterans of the World War.

The Irish politicians who collaborated in this – the likes of John Redmond and John Dillon – and sent so many young Irish men to their deaths in the vain hope that the British Empire would reward them with a painless granting of Home Rule committed an unpardonable betrayal of their own people.

The Catholic Church began (though it later changed its position) by supporting the war ‘to save Catholic Belgium’. This was a piece of cynical deception on numerous grounds: the German assault on Belgium had nothing to do with it being Catholic but was solely to do with its location between Germany and France; Ulster Protestants (2000 of whom died on the Somme) were also urged to defend ‘poor little Belgium’, with the ‘Catholic’ left out; Belgium was small but not poor and a significant and exceptionally brutal imperialist power in Africa; Britain was not fighting to defend Belgium at all but the British Empire.

Bringing the war back home doesn’t just mean relating the First World War to Ireland, its also means relating it to the world and Ireland today.

Two points, in particular, need to be made. The first is that the imperialism that gave us the First World War has changed its shape in various ways but as an economic and political system is still very much with us and still producing deadly imperialist wars, notably in Afghanistan and Iraq, with the very real threat, as the conflict in the Ukraine shows, of a revival of the Cold War. This means that anti-war campaigning remains a crucial political task.

The second is that Ireland has been served well by its neutrality – a legacy of its history of struggle against British imperialism – but that neutrality is now under threat in a number of ways. It is already massively compromised by the ongoing use of Shannon airport by the US military for troop movements and rendition flights, as recently highlighted by the Margaretha D’Arcy case. In addition it is clear that under Eamon Gilmore Irish foreign policy is consistently, if quietly, subordinate to that of the US and the EU and that the present government of Ireland, especially its Fine Gael component, contains a number of latter day Redmonds who would like to end Ireland’s neutrality and even join NATO or uncritically support the EU’s PESCO efforts to create a new army for the Union. Fortunately recent opinion poll evidence shows that the large majority of the Irish people want Ireland to remain neutral.

Needless to say everything argued in this article about the imperialist nature of the First World War and the terrible slaughter it engendered reinforces the case for Irish neutrality and opposition to imperialism today.

In Support of BDS