With the development of new anti-racist movements, there is a renewed interest in the history of the Black Panther Party. Shaun Harkin spoke to Donna Murch—historian and author of ‘Living for the City’—about the overlooked aspects of the Panthers, from their founding days, to their focus on political education.

What do you think is driving the revival of interest in the Black Panthers?

I think the revival of interest is driven by a couple of different things. Firstly, for many years the Panthers were something which the mainstream media wouldn’t talk about, and there was a deep bitterness among the liberal press, universities, particular centrist and even liberal Democrats who blamed the Black Panther Party for a split that happened in the late 60s, in which a left-liberal coalition couldn’t be effectively created. They blamed a combination of the urban rebellions—where mass groups of people went out on the streets and rioted—and the Black Panther Party for not being able to create a broader coalition. They even blamed them for the rise of the right wing republican party, with the election of Nixon and Reagan. That led to a lot of silencing of the Black Panther Party, but their history was rescued by a generation of young black historians, and I’m one of them. The first people do this was Yohuru Williams; who wrote a history of the New Haven Black Panther Party. I would say a lot of that historical recovery has happened in universities. 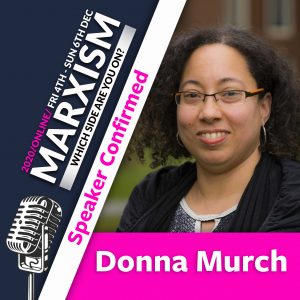 Interestingly, now mainstream media seem to have embraced the Black Panther Party. Even Beyonce did a Superbowl performance which was horrible, but was good in a way because it sparked interest among students. During the performance they wore Panther berets with heels and stockings, and it at portrayed the iconography of the Party in a positive way, and communicated it to viewers who perhaps wouldn’t know much about the Black Panther Party or would have mixed feelings about it. Another important aspect of the mainstream embrace was when the Corporation for Public Broadcasting—our equivalent of the BBC, which is funded by the state and some corporations—provided money to Stanley Nelson (the MacArthur Genius Grant winner who made a famous film called Freedom Riders), to produce a two and a half hour documentary on the Black Panther Party called ‘Black Panthers – Vanguard of the Revolution’.

What led to the formation of the Black Panther Party, and what factors and personalities were particularly important in that?

I wrote a book about the Black Panther Party called Living For The City—taking the name from a Stevie Wonder song that everyone should listen to because it is a wonderful song about the migration from the South to the North and what was confronted in the North by Black migrants, and it is very much the spirit of my analysis.

The party was founded in Oakland, California, in October of 1966 and its founders were Huey Newton and Bobby Seale, both of whom were children of migrants who migrated from the rural South. Newton’s family were from Monroe, Louisiana, and Seale’s were from East Texas. Though Newton and Seal were first generation college attendees, they were low income people who were attending college at a time when state and community colleges, and the University of California were all free. That’s really important because it was often said that the Black Panthers were middle class because they went to college, but they weren’t. They were poor and had spent time in prison and could only attend because it was free.

There is a powerful historical irony that the Panthers were the children of ‘defence migrants’, who moved North to fill employment gaps due to enlistment during WW2, and to escape poverty and discrimination. But the formation of the Panthers didn’t happen in a vacuum—there were very important resources in the Bay area, where many had migrated, that made it possible. Most importantly was the dense network of colleges, a culture of protest, and the institutional history of the left in the area, like the International Longshoremen’s Association which was a communist union leading back to the Wobblies.

So there are a combination of things, black migration from the South, the institutional history of the left in the bay area and the very important expansion and democratisation of higher education. While the party is known for guns and paramilitary imagery, they were actually founded on the edge of a community campus and the way that they first met and became politicised was as part of a study group.

How important was Malcolm X to the young founders of the Black Panther Party, since some of them described themselves as the heirs of Malcolm X?

Often when reflecting on African American history, a lot of mainstream media focuses on the civil rights movement and Martin Luther King and the struggle to desegregate in the South led by churches. But Malcolm X was a very important leader who came from a working class migrant family, was arrested and thrown into prison where he became politicised, and in my opinion became the premier black intellectual of the 60s. But his life was cut short. Like Martin Luther King, he was killed in his 30s. He broke away from the Nation of Islam and founded the organisation of Afro American Unity which was modelled on the organisation of African Unity, and he was interested in an anti-colonial project and was moving further and further to the left. At the moment when he was killed, he was involved in the creation of a new kind of black radical politics.

So there is a melancholic relationship of the entire black power movement. The black power movement refers to the period beginning with the 1965 Watts Rebellion in Los Angeles—which was the largest rebellion in American history was triggered after an instance of police violence against a young veteran—about six months after the assassination of Malcolm X. They were trying to imagine what kind of politics Malcolm X would have embodied had he lived. And the Panthers aren’t the only ones, but Newton and Seale called themselves the heirs of Malcolm X. When the Black Panther Party was founded, they were initially revolutionary nationalists—not traditional black nationalists, but associated with the Revolutionary Action Movement. That tradition was one of the black left which merged nationalism with Marxism and it was very different from the white left.

Police brutality was one of the first things that the panthers organised around, exploiting a loophole in California law. How did that work?

The premier catalyst for the formation of the Black Panther Party—institutionalised state violence against Black people—reflected experiences all over the United States. In the Bay Area, they had the same experiences, but also the resources to mobilise against it. The founder’s parents migrated because they were trying to escape Jim Crow in the South and they were looking for employment in the North. But what they and their children found—and Stevie Wonder sings beautifully about this—is that they may have escaped the Southern discrimination, but what confronted them in the North was a system of prisons, criminalisation, and juvenile detention facilities. The criminalisation of the youth was especially pronounced.

So they have a very intense experience of state violence, and not just police brutality—it’s much more profound than that. They develop a deep, deep anger at the state. Newton as a student starts studying California law. California was a ranching state which meant it had liberal gun laws and he finds that it is legal to carry loaded, unconcealed weapons. So what they do is take on a form of activism that emerged after the Watts Rebellion, when began monitoring the police with tape recorders and notebooks. Newton and Seale came up with the idea of adding a gun to the monitoring. They wanted to police the police. They formed patrols and drove around the city and whenever they saw a black person being stopped by the police, they would get out holding loaded, unconcealed rifles and would read from the California code books and the constitution about what people’s rights were. They were trying to prevent police violence against individual people.

There is the view that the BP were primarily about armed struggle and policing the police with guns as you mention. Can you talk about what existed more broadly than that?

That’s very important, there are several surprises about the party that differ from mainstream perceptions, like the fact that they started from a study group, that they were a deeply intellectual movement who started a newspaper in 1967 and wrote a dozen autobiographies.

They were deeply intellectual but they were working poor and working class which was deep within their DNA. Also, the police patrols were only legal for six months, so it was very short lived when the state overturned the law. The longest running institution in the Black Panther Party was actually their liberation schools that they started in late 60s and early 70s in Oakland and beyond. They founded the Huey P Newton Institute in 1973, which was a kindergarten to 8th grade public school with a charter from the state of California, and which ran until 1982.

In addition to a traditional school for children, the Panthers were focused at their core on political education, and not just through traditional schooling. They even talked about the police patrols as a form of political education. So the idea is not just that you show up with a gun and confront the state. It’s that you appropriate the means of power of the state—using the Maoist idea that power flows from the barrel of a gun. They appropriated state power to say that the state is not the only legitimate means of force or violence. You appropriate that power but you don’t just do that, you also read from the constitution and codes of law, informing people about those. Their newspaper was another form of political education and one of the key reasons that we know so much about the Panthers and they have survived in historical memory is because they left an enormous political archive.

In the 70s they turned to electoral politics, for better or worse. They even saw their electoral campaigns as a form of education. They wanted to take control of the port of Oakland and create a tax as a way to redistribute the benefits of the port to the broader population. I’m not 100% sure that they expected to win. I think they used the political campaign to distribute socialist ideas.

Finally, what is important about the Panthers today?

One of the most important legacies is with movements like Black Lives Matter. The core icon that they’ve chosen is a black woman from the Black Panther Party, Assata Shakur, who is currently in exile in Cuba. Athey have taken a poem she wrote when she escaped from prison in the late 70s, and it is the rallying cry of a movement today against state violence. Young people themselves have gone back into the political archive and have begun drawing lessons from the Black Panther Party. And there are a number of important things for them to learn. Firstly, the Panthers precedent for taking on state violence and secondly, their blend of black revolutionary socialism. The Panthers went through their own ideological evolution, but I think they provide a method for how to blend revolutionary black politics with both socialism and Marxism.

Donna Murch will be speaking at Marxism 2020, Ireland’s largest left-wing conference. See here for more information – not to be missed!