Home News Why We Must Rally for Choice

Why We Must Rally for Choice

With abortion rights nearly won for the north, Fiona Ferguson argues why it is more important than ever to march at Rally For Choice this year.

It was hard not to celebrate on July 9, when Westminster voted to decriminalise abortion in the north after October 21st, unless the Assembly is reformed. We knew we were not over the line but after decades of activism, decades of being failed by the Assembly, we could finally see a path to decriminalisation.

The majority in the north want progressive legislation for abortion. Polls last year proved that not only do 75% want legislation, but that around 65% want full decriminalisation and were happy for Westminster legislate. That should come as no surprise, since our own institutions have blocked basic reproductive autonomy for so long.

DUP MPs have vowed in the past to use the petition of concern to block abortion reform through the Assembly, a method they have adopted to block marriage equality. But the political make up of the Assembly is such that the DUP didn’t need their block to stop reform, as motions to allow abortion in the case of foetal fatal abnormality and rape were voted down by a majority of MLAs.

Though party positions have shifted under public pressure and the wave of support for Repeal, and the DUP lost their majority in the last Assembly election, there are still enough anti-choice MLAs to block abortion if the issue were to be passed back to Stormont. Activists, therefore, have met recent calls from Stormont parties to bring the issue through the Assembly (lest we breach devolution) with mistrust. History tells us that we cannot trust the big parties to legislate for our rights; be they reproductive, language or marriage.

But it is not just mistrust that leads pro-choicers to support action from Westminster. The law which criminalises abortion here, the 1861 Offences Against the Persons Act (OAPA), is a British colonial law which was introduced from London to the devolved regions and territories like New Zealand and Canada. Though most of those regions have repealed the aspects of the act pertaining to abortion, the north has not. And since Stormont won’t, many are satisfied that Westminster will revoke a discriminatory law which was implemented without the say of people here and which has been in place since before women had the right to vote.

Moreover, the denial of abortion is a human rights abuse and human rights are not a devolved issue. Therefore, the responsibility to protect human rights lies with Westminster, and the decriminalistion of abortion is long overdue. Both the UN and the Committee on the Elimination of Discrimination against Women (CEDAW) have criticised Westminster for ‘violating the rights of women’ in the north, and describing the effects of the law as amounting to ‘torture or cruel, inhuman and degrading treatment’.

Sarah Ewart, supported by the Human Rights Commission, took her case to the supreme court where she fought to have the law overturned after being refused an abortion while carrying an FFA pregnancy. The Supreme Court couldn’t rule in her favour for technical reasons, but held that our abortion laws were incompatible with the European Court of Human Rights.

And finally, there is one very timely reason to support decriminalisation through Westminster on October 22. As Emma Campbell, co-chair of Alliance for Choice Belfast, told a packed room of pro-choice activists in West Belfast discussing the next steps for abortion rights, the woman who is currently being prosecuted for getting pills for her young daughter has a court date set for the week after October 22. Women should never have been dragged through the courts for getting abortion pills which are safer than viagra and free on the NHS in England, Scotland and Wales.

No one should have been taken by the police, possessions confiscated, and threatened with life imprisonment for making decisions about their own bodies. That is what the current law in the north dictates, and any interruption in the delivery of decriminalisation from Westminster after October 21st could jeopardise the chance for one mother to escape that process.

Why Rally For Choice?

This year’s Rally for Choice march comes just one month before October 22, and though there may be cause for celebration or considerations of giving this year a miss because of the Westminster vote, I think there are three particularly important reasons why we must march in big numbers:

1. Stormont is already threatening to intervene. Arlene Foster, leader of the DUP has said she is ‘determined‘ to restore power sharing to stop abortion decriminalisation from Westminster. She went on to say that Michelle O’Neill made clear that the changes from London do not represent her party’s stance and they agreed on the importance of having ‘a distinctive Northern Ireland voice to deal with what the people here want in relation to their abortion laws’.

If that were the case, the voice of the majority here is clear: we want abortion reform. We want decriminalisation. 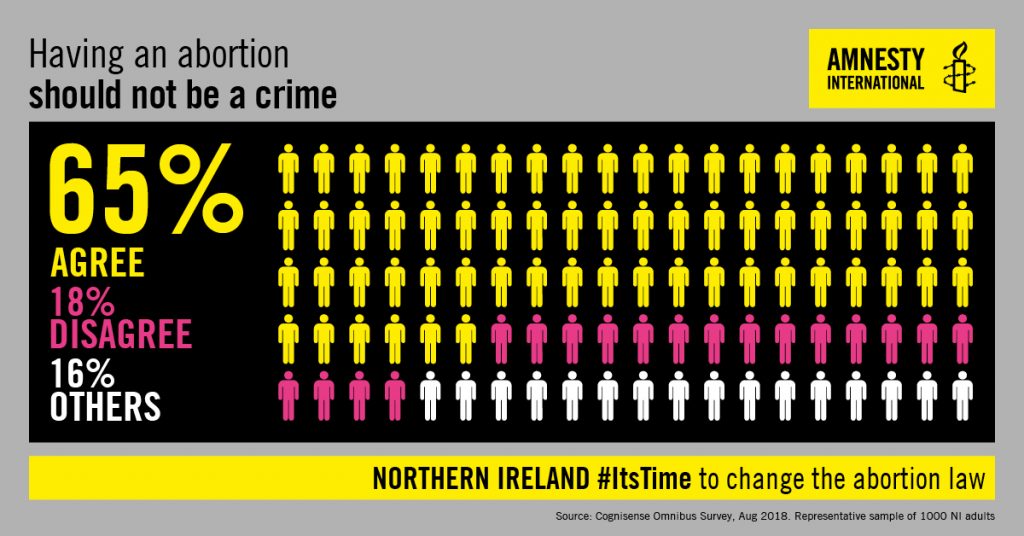 Unfortunately, Arlene Foster’s DUP do not support reform in any measure and Michelle O’Neill’s Sinn Féin do not support decriminalisation. The likelihood of either being delivered by the two big parties, therefore, is minuscule and we are more likely to see the can kicked down the road and little progress on the issue, much like equal marriage and Irish language rights.

Large numbers at Rally for Choice will make clear that we will not accept a deal at Stormont, before October 21, which does not include the decriminalisation of abortion. We need to keep up the pressure now more than ever, when we are closer than ever, to ensure the big parties don’t betray us.

2. Rally for Choice also provides a platform to discuss what kind of system we want after October 22. There was much to celebrate when we #Repealed in the south, but the resulting legislation is a far cry from the demands of the movement that forced through change. Pregnant people face a mandatory three day wait period before they are allowed to have an abortion, in case they change their minds. No other medical treatment on Ireland’s HSE requires the same patronising, controlling measures.

As Steph Hanlon wrote for Rebel, women in rural areas of the south struggle with access. Those who are working class may struggle to pay to travel to other towns, and for those who are beyond twelve weeks, it’s a plane to Britain as if the law in Ireland never changed.

Maternity hospitals are still picketed by anti-choicers with tiny baby coffins, threatening to re-traumatise people who have lost children through FFA or miscarriage, or in infancy. Pickets outside GP surgeries have led to doctors opting out of providing abortion services and have intimidated women who need access to services.

Our demands at Rally for Choice, through the speakers, our chants, our placards, can shape the debate around the kind of services we need; completely free, fully accessible, based on consultation with the pregnant person and their medical professional alone, and importantly – safe from anti-choice harrassment.

We mustn’t see anyone else dragged before the courts, or into a police station for procuring an abortion. Our reproductive autonomy should be treated as healthcare and stripped of criminality completely.

3. Finally, anti-choicers have called a counter demo to Rally for Choice. We know they are the fringe minority on this issue, and we know that their desire to enforce lifetime imprisonment on women who have abortions is ludicrous. But that does not mean that we should underestimate the numbers they can gather. They have a serious amount of funding from around the world (from religious groups in the US in particular) and they have the ability to bus people from all over Ireland, and fly them from Britain as they have in the past.

It should be clear, on September 7, that these changes are welcomed by the majority as relief from a barbaric system.

It was protest, our voices, lobbying and hard graft by activists over decades that delivered the Westminster vote. Westminster had the opportunity to legislate for abortion here in 2008 and failed. In 2019, years of activism have brought us to a point where it is undeniable that we need change and that Westminster is culpable if it does not implement it.

But we cannot rule out the potential for Stormont to cobble a deal with weak concessions on the Irish language and equal marriage, intentionally omitting abortion rights. We have to make clear that this is not an option.

We will not wait any longer for abortion rights. We will not support a deal without them. Nor will we support any deal which makes weak attempts at Irish language or equal marriage rights to scupper abortion – we need proper legislation for all three. We will march and we will make our voices heard in Belfast.

We will Rally for Choice on September 7.

Check out the Rally for Choice event here.

Race and Guns in the USA

Ian Angus on the Politics of Ecosocialism