As the world continues to grapple with COVID-19, Maeve McGrath takes a look at how artists have depicted plagues and epidemics in times gone past.

While much has advanced medicinally and technologically since, the art of such eras can offer us other insights, pointing out the similarities between pandemics in class-divided societies.

It’s estimated that more than 30% of the European population died in the Black Death. In some cities, such as Venice, up to 60% of the inhabitants died. Half of Paris’s population of 100,000 people were wiped out. It isn’t surprising, then, that the art of this pandemic is more fixated on skeletons and death than an Iron Maiden album cover.

Frequently artists depicted a so-called Dance of Death, a gyrating row of people from all classes being led away by gleeful skeletons. These works relished the fact that the nobility were not exempt from the fate of their serfs. Unlike in the 14th century, we now know of course that diet, sanitation, and other factors can improve one’s chance of survival. Instead, the pervading narrative was that the ruling class was inherently better and deserved these privileges. Despite that, these artists took pains to emphasize the seemingly levelling effect of the disease. 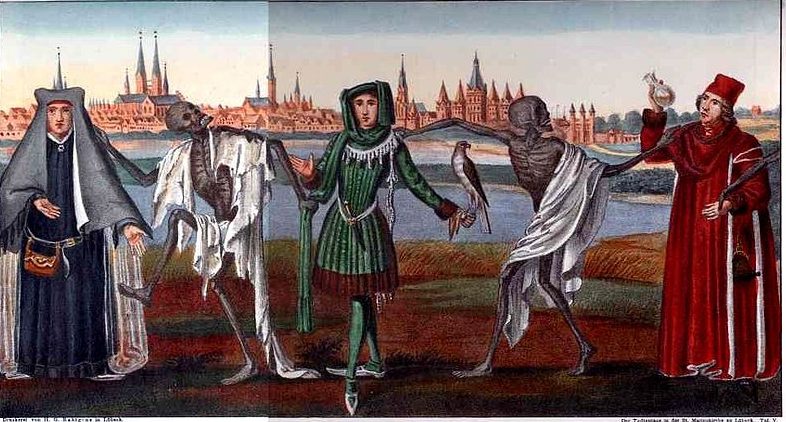 Art was also used to process the horror that the plague brought. Much as drone shots from America and Brazil today hover over mass graves, so too did artists use their medium to depict the awful reality of disposing of corpses.

Art performed a vital role in the teaching of medical students. Wax models known as moulages were used to create realistic representations of healthy and diseased bodies. Without modern imaging and preservation of corpses, these moulages were an invaluable resource for students as they could last decades and in some cases, centuries. While dozens of corpses were needed for the artists to base their work on, after completion they removed the need for real cadavers in study.

Plagues, diseases and the general issues of public health have left a deep impression on Europe’s history, culture and institutions. Take as one example, the Venetian origins of the term quarantine. A bustling port, Venice welcomed international traders which also brought the potential for spreading disease. As a result, incoming ships’ crews had to spend 40 (“quaranta”) days on an island before entering the city.

Near the trijunction of France, Germany and Switzerland is the Monastery of St Anthony. The monks at the monastery specialised in treating the plague and a range of skin diseases. The chapel housed Matthias Grünewald’s Isenheim altarpiece.The altar is decorated with unnervingly evocative images that include details of what the patients there suffered. The paintings detail events from Christ’s life but given the graphic skin lesions and pustules that afflict him it is difficult to accept this surface reading. It is more likely an attempt to recreate what the patients there experienced, as a way of elevating and comparing their sufferings to the last days of Jesus.

And the Catholic Church more generally was quick to realise that such medical suffering could be capitalised on. Between 1564 and 1587 Jacopo Tintoretto (1518 – 1594) created 38 massive paintings to decorate the Scuola Grande di San Rocco in Venice. This was the headquarters for a confraternity dedicated to St Roch, the 14th century patron saint of plague sufferers, whose remains were buried nearby. It used biblical scenes, and accounts of St. Roch’s life, to glorify their role in the public health crisis.

The climactic scene shows St. Roch curing patients by touch alone. Although cheaper than his famous rival Titian, Tintoretto did expect payment for this series. Luckily the Church had discovered that selling indulgences meant that you could shave off a few years in purgatory. Unfortunately those bureaucrats would rather spend that cash on self-glorification than the actual plague victims. 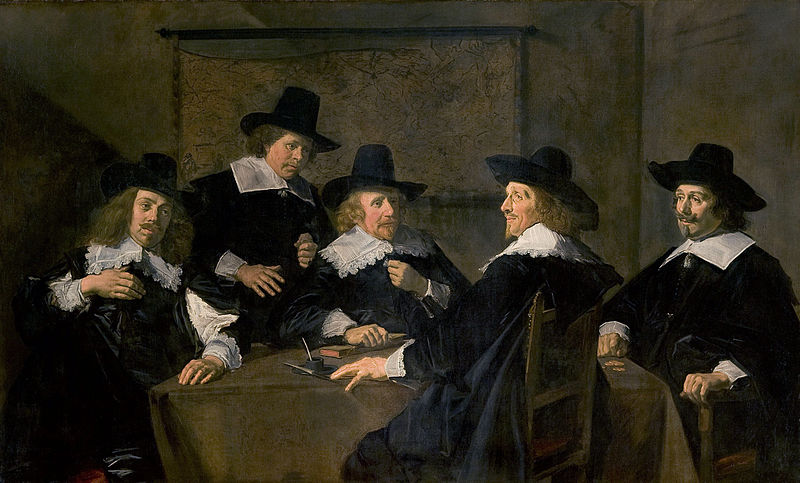 Frans Hals’ (1582 – 1666) “The Regents of Saint Elizabeth’s Hospital” (1641) shows the bureaucrats of a different kind – a hospital – with coins on the table and a land map behind them. By including these two details, the artist is highlighting that material wealth takes precedence over sympathy for human suffering to those in power. They could have been shown in the context of a ward or a patient, but instead they are sitting in their finest clothes, keeping their own company.

Accusations of prioritising wealth over health have been levelled internationally during the COVID-19 crisis. Boris Johnson’s ‘herd immunity’ strategy, which favoured keeping the economy open over lockdown to prevent the spread of the virus, was rightly rebuked. The Fianna Fail/Fine Gael/Green coalition in Ireland have made medical experts in NPHET answerable to the right-wing economist Martin Fraser.

In the 1980s and early 1990s HIV and AIDS swept across the world. Since the start of the epidemic, over 76 million people have been infected with HIV and about 33 million have died from AIDS. Transmitted through bodily fluids, a repressive media labelled it a “gay disease”, and even the “gay plague.” In reality HIV spread from person to person through unprotected sex, sharing of needles for drug use, and through birth. 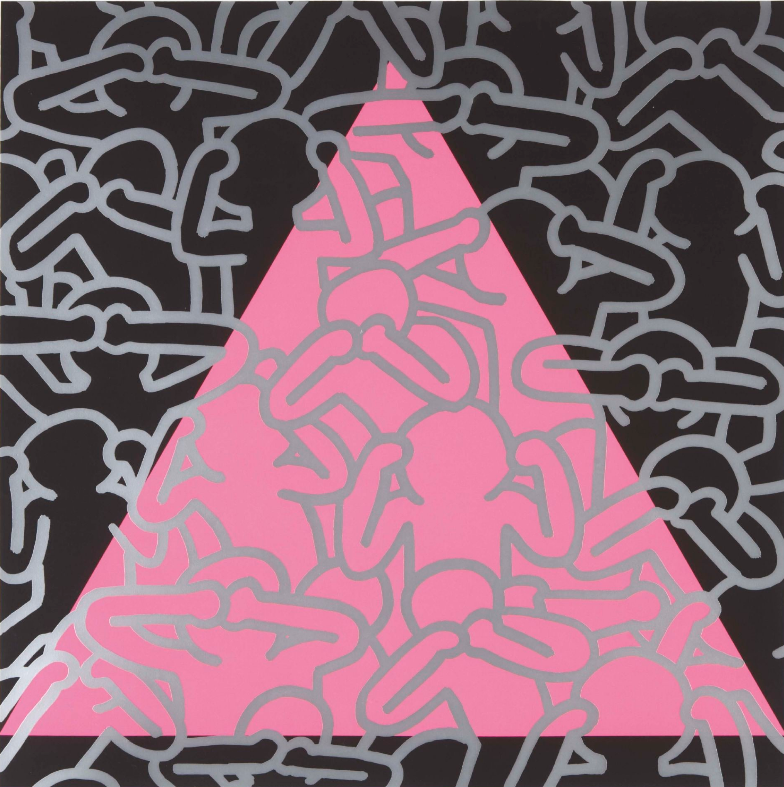 In 1989, the situation was dire: one American was diagnosed with HIV every minute and four people died of AIDS every hour. That year Keith Haring (1958 – 1990) produced “Silence equals Death”, having been diagnosed himself. The image features a motif of three figures gesturing “see nothing, hear nothing, say nothing” and is overlaid with a pink triangle – the symbol used by the Nazi regime to brandish the LQBTQ+ community. It is a reworking of a poster used by ACT UP, an organisation that fought for visibility and an end to the outbreak.

The United States had a shambolic response to the crisis and disinformation about HIV was rife. Access to healthcare was then, as now, incredibly expensive and those with the virus were often left to care for themselves. Were he alive, one can only imagine what Haring might have said about Trump’s bizarre ‘medical’ opinions and the anti-vaccine movement.

David Wojnarowicz’s (1954 – 1992) Untitled (Falling Buffalos) from 1989 is a powerful and haunting image which conveys the helplessness of the HIV positive and references the genocide of the native American population by the colonising forces. 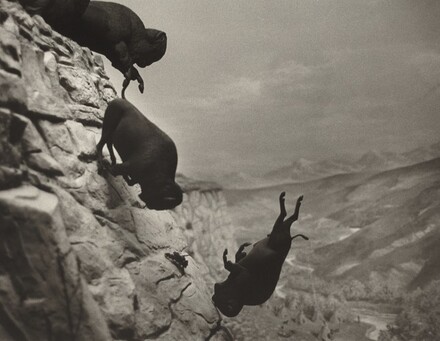 In a snapshot, he breaks your heart with the bleakness and needless wasting of life. Recently diagnosed with HIV himself, Wojnarowicz was linking the treatment of his community to that of other marginalised groups. Wojnarowicz died of AIDS in 1992.

There is a long list of artists who successfully evoked the pain of ill health. Frida Kahlo (1907 – 1954) was one of the more accomplished of these, while Francisco Goya’s (1746 – 1828) portrait of Goya with his physician Dr. Arrieta (1820) is a particularly relevant piece. Goya was a court painter in Spain and had on other occasions depicted himself in a more glamorous light, for example in his portrait of Charles IV. 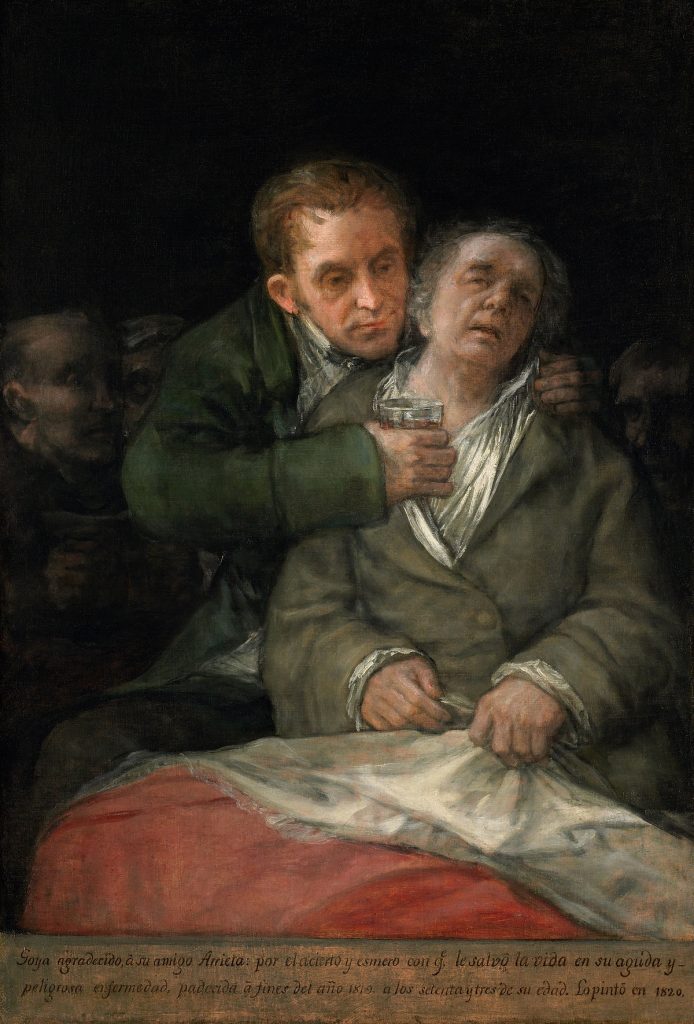 In his portrait with Arrieta, however, he is depicted as a shrivelled, washed-out old man. Goya was by now deaf and afflicted with an autoimmune disease. In a few years he would have a major stroke and his eyes would fail him. Yet the main actor in this image is his doctor. His sturdy yet careful grip belies the tenderness of their relationship. He is shown in colours more vivid and lines crisper than anyone else. By elevating the doctor to be the scene’s chief character, and simultaneously letting himself fade into obscurity; Goya is making the point that Dr. Arrieta has saved the lives of many people, and deserves the primary role in his painting.

The same year Goya completed the painting, the Spanish government sent Arrieta to Africa to study a plague outbreak. There, Arrieta contracted the illness and died as a result. This portrait isn’t just a tribute to this one man, but to the whole medical profession. This is something that governments today could learn from.

Front line workers who risk their lives on a daily basis are fighting this pandemic – not the bureaucrats or politicians. Their efforts are what will save lives and they should have all the support and resources they need to do their job.

Hospitality Workers: Time to Get Organised

Time for an All Ireland National Health Service