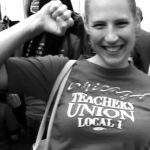 Activist Becca Bor talks #metoo, #ibelieveher, #repealthe8th and how each of these movement features in the wider global fight for women’s liberation.

The Repeal movement is shaking Ireland and transforming how people discuss abortion and reproductive health. Thousands of women are beginning to talk about their own stories of abortion in Ireland. Through the powerful Facebook page “In Her Shoes”, many are coming out of the shadows of shame, stigma and secrecy.

These stories have led to a whole host of conversations about related issues such as rape, abuse and violence. They have highlighted the complete lack of basic medical care afforded to women—the total disregard for our bodies, minds and choices in decisions about our health—and how medical staff are forbidden to give basic information when we are treated. This spotlight on abortion has also illuminated the wider issue of inequality in Ireland; a global tax-haven economy that doesn’t ensure housing, food, childcare, and heat for its people. And, of course, the referendum is a powerful reminder for everyone of how fully intertwined the church is with all aspects of Irish institutional life—from schools to hospitals, and everything in between.

The Repeal movement is part of a global struggle of women—standing shoulder to shoulder to demand equality. Across the world, women are fighting back on a range of issues; for bodily autonomy, consent, reproductive justice, and the economic and political equality denied by this system. Coming on the heels of the Marriage Equality referendum and the anti-water charges struggle in Ireland, the campaign to Repeal the 8th amendment is the most significant fight in a generation for women’s rights in Ireland. Through this movement, and the global #metoo movement which exploded here after the Belfast Rape Trial, there has been a massive shift in the way people think about bodily autonomy for women.

The so-called ‘Rugby rape trial’ was a watershed moment; ushering in a wave of anger nationally, and challenging attitudes about what kind of behaviour is acceptable. The shift has developed because of the impact of protests in Belfast, Dublin, Derry, Galway and Cork in response to the acquittal when thousands of people came out to declare #WeStillBelieveHer.

During the trial, the media allowed misogynistic and degrading text messages between defendants to be discussed as “boys will be boys”, causing public sentiment to outburst in anger and disgust. Suddenly everyone was talking and women were speaking out; creating a new consensus amongst thousands of people that rampant misogyny and sexism is simply unacceptable, and must be stamped out at every level of society.

When Ulster Rugby cancelled Paddy Jackson and Stuart Olding’s contracts, there was no public outcry in defence of them. Granted, action was taken because Ulster Rugby was threatened with losing their lucrative sponsorship deal with the Bank of Ireland, but this only illustrates how much pressure the Bank of Ireland was under, and how quickly sentiment changed about the acceptance of crude sexism in sport.

Additionally, because of the post-acquittal protests, a review will now take place on the procedures and protocols in the justice system for cases of rape and sexual assault. Such a review is welcome given the widespread belief among women that rape victims will simply not be believed by the police and courts—something pointed out by the survivor herself in text messages, before she reported the incident. Victim blaming is found at all levels of the judicial system. We see it in the court system, the method of questioning victims, and the mainstream media treatment of survivors. It is a traumatic ordeal for victims to put themselves through, and can only serve to re-traumatise in the process. In the Rugby rape trial the victim did everything she was supposed to do; she communicated immediately that she was raped, she got a medical exam, and she reported it to the police soon after it happened. And still, she was failed. There can be no doubting, then, that this system fails women.

The current global movement against sexual assault is sweeping the world. The #metoo movement continues to shake the United States, most recently with Eric Schneiderman, New York Attorney General, who took legal action against Harvey Weinstein, being accused of physical violence against women. 5.3 million women in Spain participated in the International Women’s Day Strike, and thousands filled the streets protesting against the rape in Pamplona for their #noesno movement.

One of the reasons why the movement is shaking Ireland now, is because of the rapid change in material conditions for women in Irish society. The Repeal movement feels like a different world from the referendum in 1983 to include the 8th amendment in the constitution. This is because women are living in a different world today. In 1971, 27% of working aged women were in the workforce, by 1992 it was 48% and by 2015 it was 68%. Work outside the home broadens women’s horizons, increases their financial independence, and changes their outlook on their lives. As women entered the workforce in big numbers, they began to demand a new Ireland.

Yet, despite these new freedoms for women, sexism is still pervasive in Ireland and across the world today. It can feel overwhelming to look around and see just how much misogyny and gender oppression is woven into every institution, as well as most interpersonal relationships. The system around us has much to do with today’s gender oppression.

Under the current economic and political system, namely capitalism, the vast majority of people in society are compelled to work for a wage in order to live. Workers neither control nor own our labour. The one thing that capitalists need above all else, is us workers. Ultimately, their profit cannot be made without the workers who labour to create the commodities that profits come from. There are many ways to acquire workers; with slavery, workers can be bought and sold, and with immigration, workers can come from other far off places. But, today, in most places in the world, the most common source of workers is through generational procreation. In other words, through having kids. The place where this happens in our society is the private individual family. The family is where the next generation of workers is born, reared and educated. It is where the current generation of workers is clothed, fed, and nourished. And it is where the last generation of workers is nursed, cared for and housed until their last days.

This is why female bodies have been regulated for millennia. As long as there has been future workers needing to be born, sex has been regulated by ‘tradition’ or ‘the church’ or ‘the state’. Women’s equality was one of the first casualties of the emergence of a class divided society. Since capitalism, perpetuates gender oppression in this way, we are all raised in a deeply sexist society. Sexist ideas are internalized by people of all genders and sexist institutions are presented as “just the way it is” or even “common sense”. From the cradle to the grave, our lives are shaped by inequality, gender oppression and exploitation.

Invariably, it is women who bare the greatest burden of these measures. And this process has the effect of worsening the problem of discrimination and misogyny in society. The workplace is the most undemocratic space that we exist in. We have few rights at work; we are expected to do as we are told and often, we are at the mercy of the boss. Since the relationship in the workplace between worker and boss or manager is so hierarchical and undemocratic, abuse of power and sexual assault and harassment can often be rampant. In fact, the #metoo and #timesup movement are much about workplace bullying and sexual violence. Workers within the public sector, who are generally unionised, tend to work under better gender discrimination policies, with more equal pay and with more regulation. The public sector tends to have better maternity and sick pay policies too.

As more services are privatised and cut, not only do the beneficiaries of the services lose out, but so too do the workers with the responsibility of delivering the services. As a consequence of the pressure and stress flowing from cuts and privatisation, women workers and service users will therefore face more gendered oppression. Capitalism entrenches sexism in another way too. A central aspect of neoliberalism is to turn everything into a commodity that can be bought and sold, such as water, education and even our very bodies. Commodification of our bodies and sex is not only profitable, but it also creates alienated conditions within interpersonal relationships. For example, in the absence of evidence based sexual health education, many young people—of all genders—learn about sexual relations through pornography. The common storyline of porn is that men dominate women and women say no until they succumb and say yes. In other words, the opposite of consent! And, of course, there is no LGBT sexual health in most schools.

This is why the control of our bodily autonomy, from abortion to consent, to women’s health to sexual assault and rape, is absolutely crucial. Though bodily autonomy is experienced on an individual level, the solution to eradicating it is collective. Emancipation means de-commodifying our bodies and our entire society.

To that end, a new movement has emerged that’s challenging sexist language, ideas, behaviour and violence, whilst simultaneously taking aim at myriad of institutions perpetuating and reinforcing sexism throughout society. Challenging the system is not enough; we must fight for the reforms that will allow women to have real choices in their bodily autonomy and reproduction. The Repeal movement can open the door to wider campaigns for affordable childcare, accessible healthcare, and to once and for all, the separation of church and the state. The #metoo movement reinvigorates calls for better sexual health education, workplace discrimination policies, protocols in the justice system and an end to the toleration of casual sexism and misogyny in sports, the workplace and social settings. This will benefit not just women, but all genders. Our aim is a society of genuine equality for all.

Women across the world are standing up, gaining confidence, and have decided that they are not taking it anymore. In Ireland, we have a historic opportunity to propel the international movement for social justice and equality forward by repealing the 8th Amendment.

Originally from the US, Becca is an activist based in Derry.

The North is Now

[…] an article earlier published on this website earlier this year, Becca Bor looked at the transformation that Ireland is going through as a result […]