Home Features Where Is The Global Economy Going?

The global economy has been expanding in the last number of years, but growth rates have been sluggish. Where is capitalism going? Socialist economist Brian O’Boyle gives his take.

The global economy continues to present a conundrum to mainstream economists. In the positive column, they can point to the fact that capitalism is experiencing its longest recovery since World War Two after a decade without a serious recession. Stock markets are also booming, with price increases of between 12% and 35% on the major stock exchanges last year. In the real economy, unemployment is at impressively low levels and some consumer spending, particularly in the United States, has been resilient. Viewed through this prism, one might expect positive forecasts for 2020, but the picture is far more mixed. Some mainstream commentators expect the next 12 months to be better than 2019, but the IMF and the World Bank are more pessimistic.

Despite having historically low labour costs, the longest period of cheap money in history and policy makers that continue to implement pro-business neoliberalism, the IMF expects the pace of capitalist growth to be weak next year. The World Bank also fear weakening activity. The biggest reason for their pessimism is a lack of real investment, particularly in the manufacturing sector. Last year saw the biggest fall in manufacturing activity since 2009, with all the major Purchasing Managers Indices (PMI’s) in negative territory. Look at the figure below to see the decline in machinery, equipment and consumer durables over the last two years. 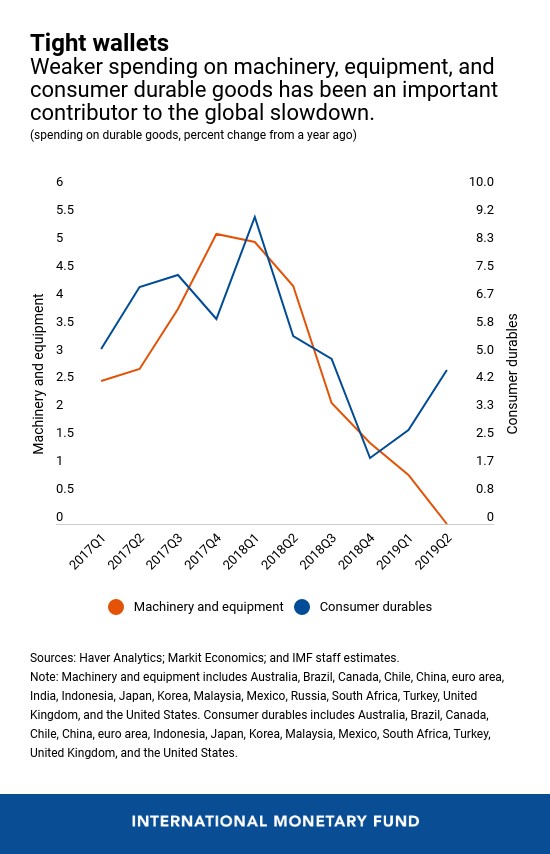 Manufacturing currently makes up between 10-40% of the Western economies, but there has also been a long period of weak investment in the rest of the global capitalist system. At a recent meeting of the IMF, the Ex-Governor of the Bank of England, Mervin King, pointed out that the latest recovery is not only the longest since the Second World War, it is also the weakest.

During the early 1930’s, output and employment fell sharply, but the destruction of unproductive capital associated with the Great Depression and WW2 meant that the recovery was also spectacular. By 1950 for example, the global economy was back on the path it would have been on if the Great Depression had never happened. To achieve the same feat by 2028, the Western economies would have to shift from less than 2% growth to more than 3% annually, but this doesn’t look remotely like happening. Look at the trajectory of global capitalism in each of the last four recessions alongside growth projections from Morgan Stanley for reasons to be pessimistic.

Another sign of weak activity is the relentless build-up of debt globally. Cumulatively, this now stands at an eye watering €230 trillion—or three times the size of the global economy annually. Debt was one of the major planks of the neoliberal revolution from 1980 until the Great Recession as,

• Corporations increasingly used debt to finance themselves and achieve tax deductions.
• Governments increasingly borrowed savings from their richest citizens instead of taxing them.
• Working families often got into debt as a way of replacing falling incomes.
• Bankers were encouraged to funnel debt to all comers in order to sustain economic activity.

Debt has also been a major plank in the neoliberal nature of the global recovery as central banks pushed interest rates to historically low levels to help companies stay in business and make investment more attractive. This period of historically low interest rates was expected to be temporary, but such is the weakness of the system, financial elites are reluctant to put them up again. The Marxist blogger, Michael Roberts, recently pointed out that 28% of US companies with a market capitalisation of less than a billion dollars currently earn less than the cost of servicing their debt. This means they can only survive thanks to historically low interest rates that allow them to borrow to tread water—a form of corporate Ponzi scheme. These Zombie firms would have been forced out of business in previous recessions, but this time around they have been allowed to survive thanks to the risks to the financial system of forcing them under. This makes a major recession less likely in the short term, but it also leaves a lot of unproductive capital clogging up the system and makes the next recession more dangerous as widespread bankruptcies become ever more likely.

Historically cheap money also creates what economists call ‘moral hazard’, as firms, governments and households build up debt in the expectation that this will always be cheap and readily available. The debt pile in less developed countries has now reached $50 trillion for example, making this part of the system extremely vulnerable to a global slowdown. But the build-up of debt has been universal as the chart blow from Merrill Lynch makes clear. 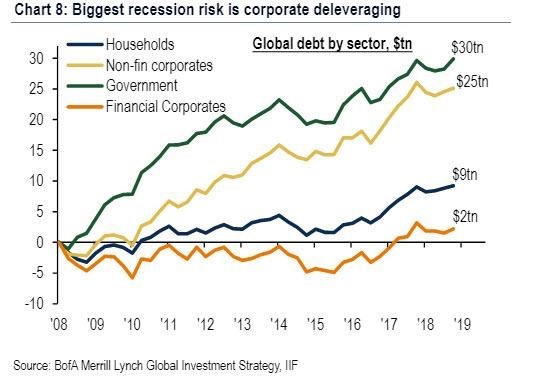 Aware of these dangers, central banks have tried to slowly increase interest rates, but every time they do, the global economy slips towards recession. Twenty central banks have actually had to ease their monetary policy in the last 12 months ensuring that, as a global weighted average, interest rates are now at a seven-year low. Twelve years after the Great Recession, this is another indication of just how artificial the global recovery is, particularly when we link it to another feature of the global system—the spike in the value of financial assets. Ideally, policy makers cut interest rates in the hope that it will make investment cheaper in the real economy. If profit rates were expected to be high enough this would be happening, but instead, a lot of this money is being borrowed by corporations for use in financial speculation. One of the biggest aspects here is multinational corporations buying their own stocks to keep their prices elevated. In 2018, US buy-backs reached €1 trillion for the first time, as cheap money is being increasingly used to create what Marx called ‘fictious capital’.

This helps to give short term returns to the holders of financial assets, but it is not a replacement for the creation of surplus value based on the exploitation of working people. Employment has increased, but again the weakness in the system means that this is largely replacing investment in capital machinery rather than being used to power an expansion. Look at the two charts below to see the anaemic rate of profit that is ultimately undermining confidence in the system.

In Capital (Vol 3), Marx laid out the reasons why profit rates tend to fall in bourgeois economies, identifying this as the most important law in political economy given how important the return on investment is for the health of capitalist society. During the early 1980’s, our rulers hoped that by freeing up constraints on capital, weakening the global workers movement and taking advantage of pools of cheaper labour in the global south, capitalism could be moved onto a higher long-term accumulation path with higher rates of corporate profits. This has proved to be little more than a pipe dream, however, but neoliberalism did prove to be an effective ruling class strategy for managing the system in a phase of longer-term decline. Although the elites did not increase the long run rate of profit, they did succeed in keeping more of the surplus value for themselves. This was done by attacking the main institutions of labour, as trade union rights were removed, and the welfare state was rolled back substantially.

This has allowed the global ruling class to use neoliberal policies to escape a crisis of neoliberalism, but only at the expense of continuing stagnation in the capitalist economy and a growing crisis of legitimacy for the ‘neoliberal centre’, as working people increasingly realise that modern capitalism means endless austerity, run away climate change and increasing global conflict. This helps to explain why the level of struggle is at an historic high level at present, but also why the level of class consciousness and class organisation is relatively low—although this might be showing signs of changing with French and Indian workers striking in massive numbers in the last number of weeks. The other major aspect of the last 40 years has been the inexorable shift in power and wealth from West to East. The rise of China has been one of the most obvious aspects of the neoliberal period and when combined with the slowdown in the traditional centres of accumulation, this has led to an inevitable rise in geo-political tensions.

The other big reason for IMF and World Bank pessimism is the ongoing trade war between the US and China. After World War Two, the American elites created a global free trade environment that disproportionately supported, and still supports, their corporations. Most of the Western ruling classes still support this architecture, but with America and Europe now in relative—and seemingly terminal—decline, several hard-right populists have broken ranks, with the aim of winning power domestically and wrestling more of the system for their respective backers.

During his election campaign, Trump promised to be more aggressive with China as part of his strategy to ‘Make America Great Again’. The reason for this is the inexorable rise of Chinese capitalism, which has grown by a cumulative 6,000% since they moved decisively into State-Capitalism in 1978, alongside Trump’s desire to get re-elected. Western leaders are undoubtedly worried by this new reality, but few favour the disruption that comes with the aggressive tariffs the Trump administration has imposed. To date, €300 billion worth of Chinese exports and €80 billion worth of US exports are facing tariffs. This has inevitably put a dampener on global trade and helps to explain why, just last week, both sides have agreed to a truce on about half the goods currently affected. The table below helps to explain the damage to the wider global economy. 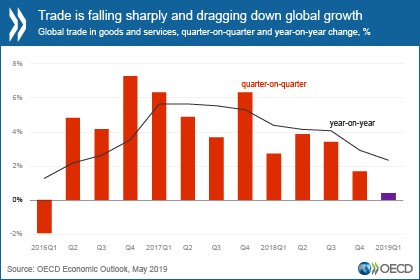 In addition, the fight between the worlds two biggest economies is causing other forms of longer-term disruption. Mainstream economists don’t usually recognise the tendency for the profit rate to fall that Marx identified, but they do understand the importance of capitalist investment decisions for the ongoing health of the international economy. This explains why the IMF have used their latest Global Prospects Report to lament the fact that the trade war is not only disrupting global supply chains it is also undermining business confidence and investment. Meanwhile, the severity of American tariffs has also increased the possibility that the Chinese leadership may begin to decouple their companies from reliance on Western consumers. Reflecting on this prospect the Chairman of the Eurasia Group, Cliff Kupchan identified this as…

the single biggest thing that worries me…The inexorable march by the two countries to separate at least the technology sectors, and possibly more—I fear it will lead to the weaponisation of tariffs as the new normal, force third countries to take sides, and act as a real drag on growth”.

Whatever happens in the shorter term, it is likely that, over the next few years, the global system is likely to become even more unstable as China overtakes America as the world’s biggest economy, climate change becomes an ever-bigger menace and the unproductive capital at the heart of the system continues to act as a drag on global profitability. In the meantime, the big unknown is how the global wave of grassroots protest will interact with this instability.

Australia – A Portent of Chaos to Come