Home Features The Failure of the Far Right

The dismal performance of the far right in this month’s General Election was a positive victory in the fight against racism. That fight, however, is not over. John Molyneux takes a look.

‘The rise of the far right’ has been an all too familiar headline over the last few years in places ranging from Brazil to India, Italy to Spain. Over the last year or so there have been grounds for concern that something similar might be about to happen in Ireland—the arson attack on the Direct Provision Centre in Roosky, the Peter Casey phenomenon in the Presidential Election, a substantial fascist march in Belfast, the agitation in Oughterard, the racist dog whistles of Noel Grealish and Verona Murphy, the ranting of Gemma O’Doherty and so on.

Fortunately, one of the most notable features of the recent historic General Election has been the utter failure of the far right to gain any serious traction.

The facts are stark. The fascist National Party—they really are fascists—led by Justin Barrett (formerly of Youth Defence) polled 0.2% overall and only 4,773 votes across the country. Their best result was in Longford-West Meath where they got 1.75%. The Irish Freedom Party, led by the aptly named Hermann Kelly, and by Ben Gilroy, formerly of Direct Democracy and the Irish Yellow Vests, did better: they got 0.3% of the vote nationwide. Their best result was 2% in Cork North West—a highly conservative area and one of the very few seats untouched by the Sinn Féin surge; their worst was a total of 119 in Dún Laoghaire.

Unsurprisingly, the notorious Gemma O’Doherty, standing as an independent in Dublin Fingal, was among the more successful far right candidates but still polled only 1.97% (1252 first preferences ). Presumably she chose Dublin Fingal because of the migrant population in Balbriggan. John Waters in Dún Laoghaire got only 1.5%

It was particularly satisfying to see the pathetic performance of Peter Casey. With money no object, Casey who had polled over 20% in the Presidential election on the basis of anti-Traveller racism, arrogantly stood in two constituencies—his home base of Donegal and Dublin West (again chosen for its migrant population). The result—only 1,143 first preferences in Donegal and a miserable 495 in Dublin West.

Equally striking is the fact that in Sligo-Leitrim, Sinn Féin’s Martin Kenny, whose car was burnt out after he welcomed asylum seekers in Roosky, easily topped the poll with 15,035 first preferences, while the National Party candidate got only 451 and Renua, who have also been dabbling in racist rhetoric recently, managed the truly dismal 75.

The only significant exception to this pattern of failure was the election of Noel Grealish in Dublin West with 13.3% of first preferences and of Verona Murphy in Wexford, with 7.8 % (5,825) first preferences, on the 11th count. Here it should be noted that both Grealish and Murphy had established substantial bases on a non-racist basis before making their racist comments. In other words, unlike Casey or O’Doherty, racism was not their main or only selling point.

Another significant indicator of the far right’s marginalisaion was the RTE/The Irish Times Exit Poll asking voters what issue was most important in their decision on how to vote. Immigration was at the bottom of the list with only 1%. 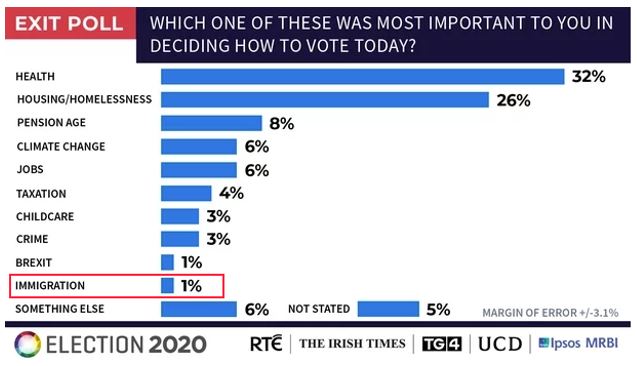 This catalogue of failures raises the question of why. Why has Ireland proved so different from so many other countries in this respect? I believe we can identify three main causes.

The first is rooted in Ireland’s history. Irish nationalism arose and developed in opposition to the British Empire and British colonialism. It was a nationalism of the oppressed not the oppressor. This gave it a fundamentally different political character and trajectory to that of British, German, French or American nationalism. The latter, linked inextricably to imperialism, was predominantly reactionary and racist and, when pushed further, led and leads in the direction of fascism. The Union Jack was the flag not only of Britain but of the Tory Party and the BNP. There has always been a cross over between the right of the Tory Party and British fascism, just as there have always been links between Loyalists and Nazis.

In contrast, Irish nationalism was always associated with the progressive side of history. This can be traced back to the United Irishmen and the links with the French Revolution. The very label ‘Republicanism’ is an expression of this and as the struggle for Irish freedom radicalised, so the direction of travel was predominantly to the left, to Larkin and Connolly, to the Limerick soviet and the Irish Revolution. Along with this came an identification with anti-racism. This goes back to Daniel O’Connell welcoming to Ireland the US anti-slavery campaigner Frederick Douglas and to Roger Casement condemning the Belgian atrocities in the Congo. You can hear it in the lyrics of ‘Come Out ye Black ‘n Tans’:

Second, there is the fact that at the time of the Crash and after, when the stable Fianna Fáil/ Fine Gael duopoly first began to crack, it was the left and particularly the far left, PBP/AAA etc. along with Right 2 Water, that were able best to articulate and focus working class anger against austerity and actually to organise and lead resistance in communities through the fight against cuts, the household charges and the water charges. This leading role of the left and the fact that this left was generally strongly anti-racist was very important in blocking the road to racist ideas and organisation which were present, for example, in the water charges movement.

Third, there is the record of the Irish left and Irish anti-racists actually combating and confronting the racists and fascists whenever they have tried to rally, march or harass mosques. This goes back at least to the mobilisation against fascist holocaust denier, David Irving, when he was invited to Trinity in 1989 and again in 2002 and was seen at its best when 1-2000 anti-racists, with the aid of Bohs fans, trounced Pegida Ireland‘s attempt to march down O’Connell St in February 2016. The same was true in Belfast in June 2018. By confronting them and, crucially, repeatedly out numbering them, anti-racists and the left have humiliated and demoralised the far right and, so far, prevented them gaining the initial foothold on to which to build and launch themselves as a credible alternative.

However, each of these explanations comes with a warning. First, the historical legacy remains important but Ireland is no longer an oppressed colony. Fortunately, Ireland has not acquired colonies or empire of its own but our ruling class and political establishment identifies strongly with US imperialism (witness the ongoing use of Shannon by the US military) and with the rising imperialism of the EU as seen in ‘Fortress Europe’ and the death toll of refugees in the Mediterranean (which Fine Gael MEPs voted to continue). This creates a certain material basis for identification with notions of white supremacy and hostility to immigrants.

Second, the ability of the left to lead the articulation of working class anger cannot be taken for granted or regarded as secure. As we have said, there was a submerged racist current in some groups in the water charges movement and we have seen the potential for racism to gain popular traction in developments such as the mobilisation against the Direct Provision centre at Oughterard.

Third, the tactic of confronting the far right on the streets is necessary but has its limits. It must be used judiciously, not obsessively and carries the risk of turning into an endless pursuit of tiny irrelevant bunches of fascists by small anti-fascist hit squads at the expense of building a serious left challenge to the system which breeds racism.

In short, the overwhelming defeat inflicted on the far right at the recent election is excellent. But there is no room at all for complacency and anti-racist campaigning must continue, combined with building the left alternative.